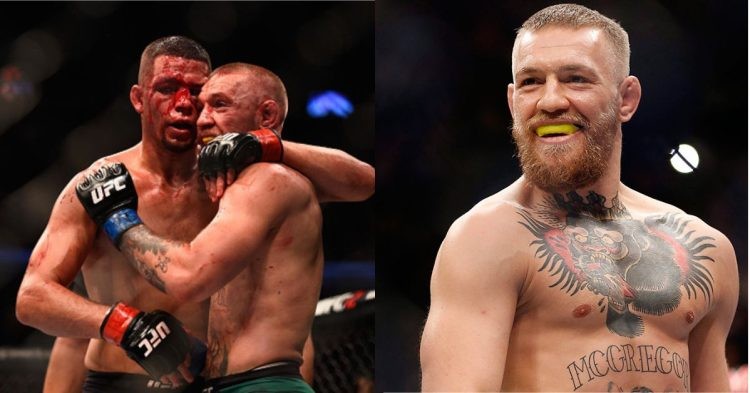 Conor McGregor hints a trilogy against Nate Diaz after UFC 279

Nate Diaz will fight Tony Ferguson in the main event of UFC 279 after a crazy turn of events that led to Khamzat Chimaev being replaced by Ferguson after Khamzat missed weight.

There has been a lot of drama going on around this event which included a massive backstage brawl and then the cancellation of the press conference and stare-down for everyone’s safety. After Khamzat missed weight by seven pounds, he was replaced by Tony Ferguson who was scheduled to fight Li Jingliang in the co-main event.

Conor McGregor recently took to Twitter to congratulate Nate for his achievements in the sport and as he part his ways with the promotion. Conor wrote:

“Congrats Nate Diaz on making it to the end of his contractual obligations with the UFC, and as a bonafide superstar goer. An incredible feat. Fair play. Our trilogy will happen.”

The Irish superstar has promised the trilogy that the fans demanded for a long time will happen at some point in the future.

Congrats Nate Diaz on making it to the end of his contractual obligations with the UFC, and as a bonafide superstar goer. An incredible feat. Fair play.
Our trilogy will happen.

Nate Diaz vs. Tony Ferguson is a dream fight for every fight fan and as many people remarked that Nate deserved a huge fight like this in his last UC fight. Many fans speculated that Nate will fight McGregor to complete the trilogy but it doesn’t seem to be happening soon unless Nate signs a new contract with the UFC.

Nate Diaz Has Unfinished Business With Conor McGregor, Hints a Trilogy in Real Fight Inc After He Leaves UFC

Nate Diaz and Conor McGregor have an unfinished history. They fought twice; in their first run, Diaz shocked the world by submitting McGregor at UFC 196 in March 2016. Later that year, McGregor outpointed him by majority decision in their rematch at UFC 202.

But for now, UFC 279 will be the last outing for Nate in UFC. The main event takes place Saturday at T-Mobile Arena in Las Vegas. He will face Tony Ferguson after his former opponent, Khamzat missed weight by a huge mark.

After leaving UFC, Nate is hoping to complete his trilogy with McGregor at some point. Conor has also shown interest in this trilogy. In a recent interview Nate stated:

“We’ll worry about that later. It’s for sure going to happen at some point.”

“Yeah, at some point. He needs to get back on what he’s got to do, whatever that is. It’s like when we match up, we’re going to match up,” He added.

The Stockton slugger has launched his own fight promotion named Real Fight Inc. Thus it is expected that he will use his own platform to make this fight happen if UFC denies giving him the opportunity under their banner.

“This fight right here that I’ve got coming up is brought to you by Real Fight Inc,” Diaz said.

“The UFC is obviously pushing their fighter on me – not with me, but against me,” Nate concluded.

In the final fight of his contract, Diaz will headline the Saturday’s UFC 279 main event against Tony Ferguson. As stated by many fight fans, this is a very sudden and exciting incident and probably happens for the first time in the promotion.