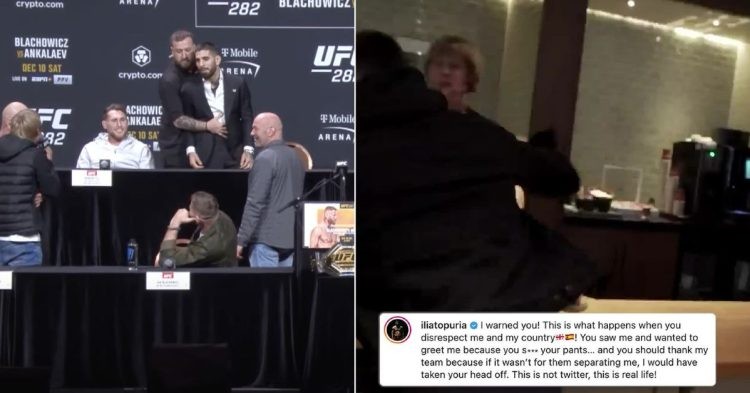 Paddy Pimblett and Ilia Topuria showed bad blood when the dup came face to face with each other during the UFC 282 pre-fight press conference. The UFC lightweight and UFC featherweight did not mince words as a verbal barrage ensued in the proceeding to the weekend’s UFC PPV inside T-Mobile Arena in Las Vegas.

Ilia Topuria and Paddy Pimblett going back and forth on stage #UFC282 pic.twitter.com/qbu4aUaRLd

While Pimblett is set to face Jared Gordon, Topuria will have a huge task in the form of Bryce Mitchell in front of him. However, looking at the pre-fight press conference, it looks like Pimblett and Topuria are ready to throw down if given a chance. Both the fighter hurled multiple insults at each other, with both the fighters almost coming to blows during the presser.

Needless to say, many fans are not aware of the history between the two fighters. So how did it all start? Let’s find out.

Ahead of UFC’s first event in London since 2019, back in March 2022, Pimblett and Topuria got into a bit of a scuffle. The UFC featherweight was the first to share the footage of the brawl, calling out the British fighter for his disrespectful comments about his country. The same was the case during the presser, where Pimblett slammed Topuria for his Georgian-Spanish roots.

“I warned you! This is what happens when you disrespect me and my country! You saw me and wanted to greet me because you s*** your pants… and you should thank my team because if it wasn’t for them separating me, I would have taken your head off. This is not twitter, this is real life,” Topuria said on social media.

Fortunately enough, things did not get out of hand as Pimblett and Topuria were separated, however, punches were thrown from both sides. In the lead-up to UFC 282, Topuria has expressed an interest to fight Pimblett and claimed that he is scared to fight him. Meanwhile, Pimblett sounded off on the idea of facing Topuria by calling him “irrelevant”.

Ilia Topuria tells @aaronbronsteter that he doesn’t take Paddy Pimblett’s trash talk personally and would be happy to face him in the future, but remains focused on Bryce Mitchell. #UFC282

Whether or not this rivalry will see both fighters knock on the door of UFC Octagon one day, only time will tell.