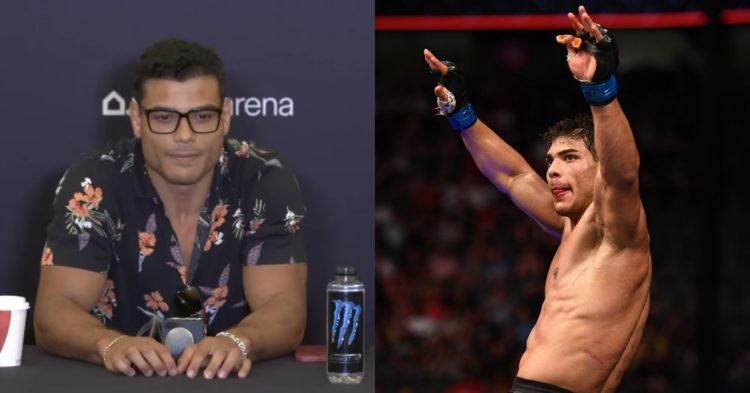 Paulo Costa may not continue with the UFC! (Images via Twitter)

Paulo Costa will be fighting Luke Rockhold in the co-main event of UFC 278. If the bout itself was not good enough to catch the fans’ attention, a major development ahead of the fight surely will! During the media day for the upcoming UFC PPV, Costa revealed that he may just be on his way out of the UFC.

Borrachinha came into the UFC in 2017 with a win over Garreth McLellan. He then went on to beat Oluwale Bamgbose, Johny Hendricks, Uriah Hall and Yoel Romero. The win over Romero earned him the very first title shot against Israel Adesanya at UFC 253 in 2020. However, it did not end well for him as he lost the bout via TKO in the second round.

Although he tried to bounce back against Marvin Vettori in 2021, it was an utter disaster as Costa refused to make weight for the fight and it was later moved to light heavyweight. Even that could not save him as Vettori beat him via unanimous decision. With both of his career losses coming in his last two fights, it will be interesting to see what the future holds for him in the UFC.

He spoke to ESPN journalist Brett Okamoto during the press junket for UFC 278. During the interview, Costa added that he is not happy with his current UFC contract.

“This is a great company. I’m glad for everything. But I’m not happy, everybody knows, with my contract. I’m happy to be here, to do what I want to do, what I love to do. But I think the contract is (outdated). Updated, they need to update that quickly. Maybe, this was necessary couple of fights ago.”

A loss against Luke Rockhold may very well push the UFC to not offer Costa another contract offer. In that case, Costa will end his UFC career with 8 fights under his belt.

Will Paulo Costa leave the company after UFC 278?

Paulo Costa has made some huge changes to his management ahead of his bout against Luke Rockhold. Since his UFC debut, Wallid Ismail represented Costa and negotiated all his contracts. However, Wallid’s negotiations came under question as one of his other high-profile clients Deiveson Figueiredo also left his agency. Costa’s girlfriend Tamara Alves is his new manager.

Although he stated that the reason they parted ways was not monetary, Costa has expressed his unhappiness regarding his compensation. In 2021, UFC announced that Costa will fight Jared Cannonier. However, Costa was not happy about it as the contracts for the fight were not signed yet. He took to Twitter to express his unhappiness.

UFC President Dana White slammed Costa for his words later and criticized his performance against Israel Adesanya. Hence, there is some animosity between Costa and the company. On top of that, Costa’s unwillingness to make weight for the Vettori fight also rubbed people the wrong way.

Costa, however, has made weight for the upcoming bout against Luke Rockhold. He mentioned that the Rockhold fight may just be the last fight of his current contract. Costa stated in the interview that he has opportunities outside the UFC and he also revealed that he would love to get into boxing as well.

Do you think UFC will re-sign Paulo Costa regardless of the result at UFC 278? Or a loss against Luke Rockhold will mark the end of his UFC run? Let us know in the comments down below.