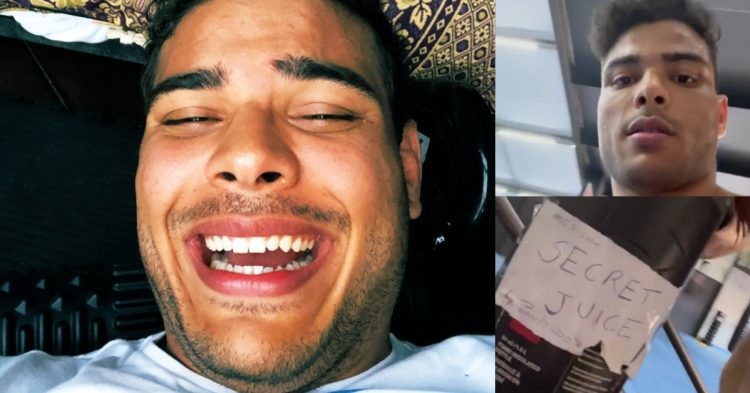 Paulo Costa sets the internet ablaze again! In a recent Twitter post, Costa made fun of all the steroid accusations about him after the drastic change in his shape.

Borrachinha has been dealing with ‘steroid use’ accusations since he joined the UFC. According to a report from MMA Fighting, Costa was caught using a prohibited IV in 2017. Because of it, he was suspended retroactively for six months. Since then, however, Costa has been able to maintain quite a clean record. But the stigma has always followed him around.

Although the issue previously made him angry, it does not look like it bothers Costa any longer. Following his last loss to Marvin Vettori in October of 2021, Costa has developed a very colourful personality online. His self-depreciation on social media platforms has humanized him in the eyes of the fans.

His recent Twitter post on him being on some kind of a ‘secret juice’ ahead of his next fight, was a direct dig at the steroid accusations.

Among the many people who accused Paulo Costa of being on steroids, Luke Rockhold is one of them. It becomes very significant as Luke is scheduled to fight Paulo at the upcoming UFC 278. Rockhold will be making his return to the Octagon after an absence of almost 3 years.

In April of this year, he accused Costa of needing ‘assistance’ in all of his contests. He also called out Costa’s professionalism for not making the weight against Marvin Vettori. The former UFC middleweight champ stated that the steroids have not worked for him in recent times, hence the Brazilian failed to weigh in at the middleweight limit of 185lbs.

Neither Paulo Costa nor Luke Rockhold was at their best during their last outings. So it will be interesting to see how the bout plays out. Luke is a very technical fighter with all-around skills, whereas Paulo is an aggressive brawler. However, Luke has the tendency of falling apart infront of constant pressure. Costa will no doubt come after him with a vengeance.

Who do you think will be the favourite to win between Paulo Costa and Luke Rockhold? Will the inactivity hurt Luke? Or, will the recent shenanigans will work against Paulo? Let us know in the comments below.