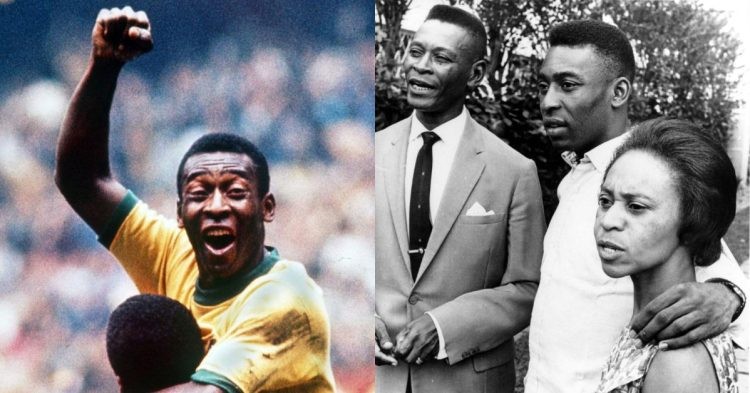 Soccer lost an icon and legend this year when Pele passed away. Unfortunately for the 3x World Cup winner, he had a long and hard battle with colon cancer. This was what caused his death ultimately. As we look back on his illustrious career, there have been numerous interesting findings that we have come across. Pele’s family and the lives that they lead are one of them.

In his book, ‘Pele: The Autobiography, the former Santos forward lets the world in on some fascinating facts about the relationship he shared with his parents. Together with that, he has also revealed how his parents felt when they first welcomed him as a baby.

Where is Pele from?

Pele was born on October 23, 1940, in Três Corações, a city in Brazil. He came from humble beginnings. The house he lived in as a child was built from second-hand bricks. This shows how the financial situation of Pele’s family was. Or “ramshackle” as The King described it. His father, Dondinho, was a former soccer player who represented Fluminense during his time. It looks like he wanted his son to follow in his footsteps too!

In his book, Pele revealed that his father was happy about his physique on the day he was born. He wrote, “Apparently pleased at the knowledge of my sex my father prodded my scrawny legs and said, ‘This one will be a great footballer.'”

Pele’s mother, however, did not feel the same way. According to Pele, “She was none too pleased with this prediction.” We are unsure of why his mother, Celeste Arantes was unhappy about her husband’s prediction back then. It appears as if she wasn’t too happy with Dondinho’s wish to make his son a soccer player in the future.

Soccer was not a developed sport back in the day. It would be extremely safe to claim that Pele was one of the first-generation soccer players who helped bring the sport to the entire globe. We are unsure of how successful Pele’s father was as a player. But we can only assume that The King managed to surpass his dad on the soccer field.

Pele managed to win 3 World Cups for his country, the most out of any player in the sport’s history. Moreover, O Rei managed to bag 77 goals in just 92 appearances for his country, according to Transfermarkt. His record for Brazil shows how big of a legend Pele was, is, and will be for centuries to come. Let’s not forget the tons of goals he has scored for various clubs as well.

His mother was able to witness her son make history and is still around to this day. We can only hope that her disappointment turned into satisfaction when she saw Pele lift the golden trophy in 1958.