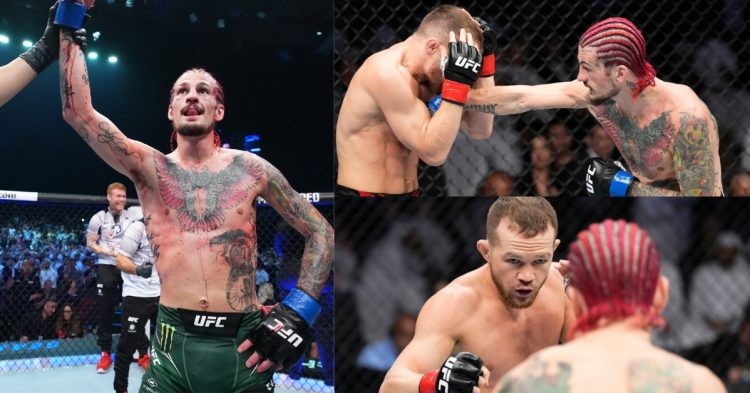 Former bantamweight champion Petr Yan stepped inside the octagon to take on Sean O’Malley in a three-round bout on the main card of UFC 280: Oliveira vs Makhachev. It is needless to say that Yan was looking to bounce back in this matchup after his recent loss to Aljamain Sterling in a title rematch.

On the other hand, O’Malley who is #11 in the bantamweight division has a great opportunity to secure a title shot if he manages to beat Petr Yan. Fight fans who were in attendance at the Etihad Arena were expecting a highly entertaining fight and it was exactly as anticipated.

Petr Yan targeted O’Malley with leg kicks in the first round. Meanwhile, Suga Sean landed some shots with the help of his superior reach. However, the Russian bantamweight landed a beautiful takedown to control the round.

In the second round, Sean O’Malley landed a powerful straight left to stun Yan and it looked like the American bantamweight would get an advantage. But Petr Yan recovered quickly and hit him with a big shot to drop O’Malley. Thereafter the former champion dominated the rest of the round by landing several takedowns.

After losing the second round, O’Malley made a tremendous comeback as he cut open Petr Yan with a flying knee. Suga Sean capitalised on the momentum and attacked Yan with jabs and leg kicks. Although Petr Yan landed a takedown and hit O’Malley with some good counters.

In the end, both the bantamweights were unable to finish each other and the fight went to the distance. One judge scored the contest 29-28 in favour of Yan and two judges scored the bout 29-28 to O’Malley and the American bantamweight won this fight via split decision.

Was Petr Yan robbed of a win against Sean O’Malley at UFC 280?

The Petr Yan vs Sean O’Malley matchup at UFC 280 was a highly competitive fight filled with violence throughout the three rounds. However, the fight could have gone either way as both the bantamweights had their moments where they dominated the bout.

Moreover, the former UFC champion controlled Sean O’Malley in the first and second rounds of the fight and even stunned the American bantamweight several times. In the end, it is needless to say that this was a highly controversial decision as Yan had the edge.