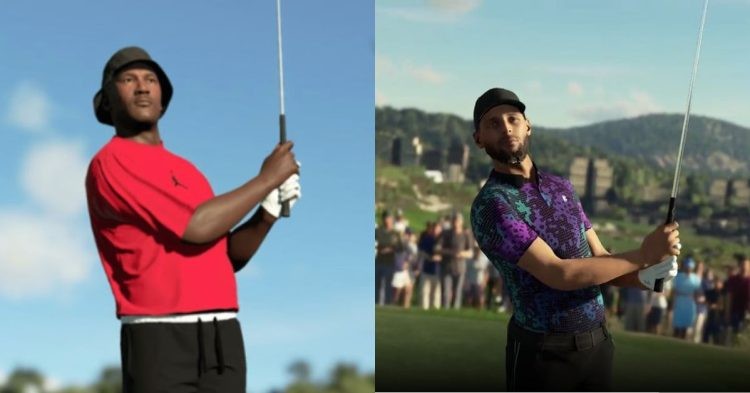 Modern-day NBA fans are familiar with the accomplishments of Golden State Warriors star Stephen Curry. Both he and NBA legend Michael Jordan can claim to be the cornerstones of the greatest and most dominant teams ever in the league.

Those who are familiar with the passions of both these basketball stars will know that they are avid golf fans.

Thus, it is no real surprise that they are part of PGA Tour 2K23. Not many basketball fans have heard about this popular golf e-sports game. Thus, we should wonder how the creators plan to include these NBA stars and what the PGA is all about.

The PGA tour is an acronym that stands for “Professional Golfer’s Association of America.” The centerpiece of attraction in this game is the world-class golfer Tiger Woods. Moreover, the game creators have also decided to include Stephen Curry and Michael Jordan avatars in this game.

While it will be easy to play as Steph in PGA 2K23, the same cannot be said for MJ. The game is set to release in three versions. They are; Standard, Deluxe, and the Tiger Woods special edition. PGA 2K23 is set to release on October 14th and will be available to the general public from then on.

The Michael Jordan avatar will not be accessible initially to the general public. It will activate only if the customer pre-orders the game before October 13th. If consumers do so, they will be given access to the Michael Jordan pack and will be able to unlock him as a playable character.

Furthermore, MJ will be available in all 3 versions of the game under the simple criteria that it be pre-ordered. This is quite an innovative marketing strategy that compels gamers to commit to the game before being thoroughly rewarded.

On the other hand, there will be no special criteria for gamers to unlock Steph Curry. His character is expected to be available in all versions of the game. The most expensive version, the Tiger Woods edition also offers something quite unique. It will allow players to have 3-day early access to the game. Additionally, certain in-game features such as “The Golden Club pack” will be accessible with the purchase of this version.

We should expect more games to include crossovers with athletes from different sports in the future.