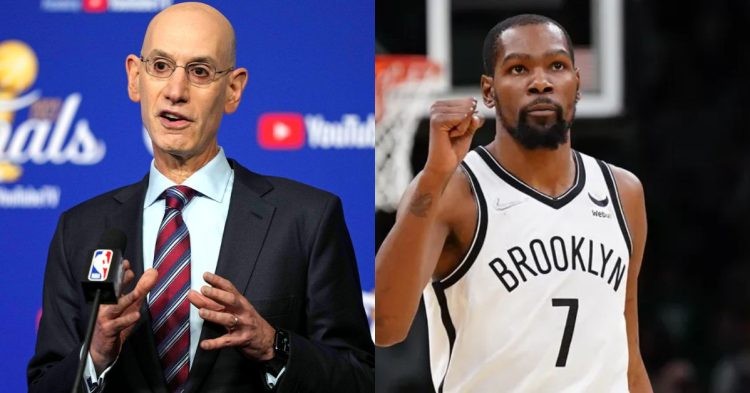 Kevin Durant has asked for a trade from the Brooklyn Nets. This happened as he most likely felt it was not possible to contend for an NBA title with them. Additionally, his former teammate James Harden requested a trade midway during the previous season. Moreover, his other star teammate Kyrie Irving refused to get vaccinated and did not play in several home games.

These, along with several other less known reasons are why KD decided to leave the Brooklyn Nets and search for another contending team to potentially end his career with. However, the form of “player empowerment” that Durant is displaying has caused the NBA owners to react.

The commissioner of the league, Adam Silver has always been a person supporting the welfare of the players. However, even he had a problem with KD’s somewhat erratic behavior and felt the need to respond to these actions. It is important to know what the NBA commissioner said on this subject.

Adam Silver has been the NBA commissioner for 8 years now. He took the role on February 1st, 2014, and has brought great change to the league during his time there. He is a clear-headed person and always makes inputs and suggestions taking the needs of the many into consideration.

The NBA commissioner was asked a question when the media was interviewing him. The question was regarding superstars demanding trades even before they had started their fresh contracts. This was clearly in the context of Durant demanding a trade from the Brooklyn Nets. Silver had a balanced and well-thought-out response to the question.

“My view hasn’t changed. I don’t know whether he requested a trade or demanded one frankly. But this needs to be a two-way street. Teams provide enormous security and guarantees for players and the expectation in return is that they’ll meet their end of the bargain I’m realistic that there are always conversations that are going to go on behind closed doors between players and the representatives of the team but we don’t like to see players requesting trades.”

Silver also went on to explain how he wishes that basketball is about the play on the floor and not everything else. His most important point was explaining the “ripple effect” that these trade moves have on other players’ teams. He finally concluded by stating that some players would always find a way or reason to be unhappy. Be that as it may, the owners of the league do not wish to see situations unfold in this manner.