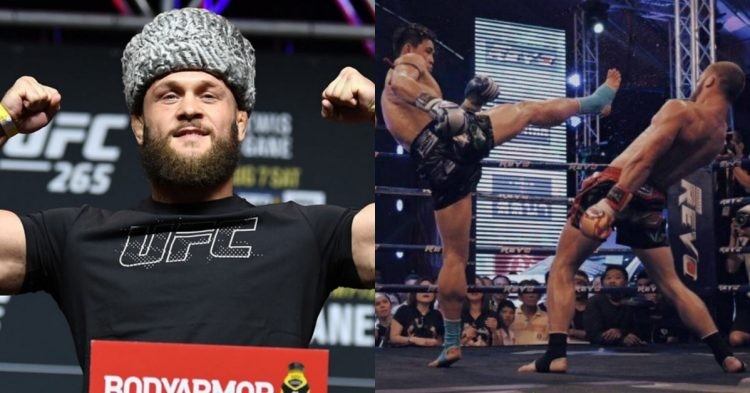 Rafael Fiziev will feature in the very first UFC main event of his career this weekend. He will take on Rafael dos Anjos at this Saturday’s UFC Fight Night. Fiziev is currently ranked inside the Top 10 of the UFC Lightweight Division. A win over RDA will definitely put him in a spot for another big fight in the weight class.

Nicknamed Ataman, Rafael Fiziev had an excellent record in Muay Thai before turning his attention to MMA on a full-time basis. Fiziev decided to put an end to his Muay Thai career in 2017. But he certainly left a great legacy behind him as he ended his run with a career record of 29 wins and 4 losses.

His list of accomplishments in the sport is second to none. The 29-year-old brought a silver medal for the International Federation of Muaythai Associations (IFMA) in the junior category in 2009. Rafael followed it up with a World Muaythai Federation Intercontinental Championship in 2010 in the 63.5 Kg division.

Fiziev was also a three-time Kyrgyzstan Muay Thai champion in 2007, 2008 and 2009 under the Kyrgyz Muaythai Federation. He was also the Kazakhstan National Champion under the aforementioned IFMA in 2011. His last Muay Thai medal came in 2016 when he won the bronze medal in IFMA World Championships (B-class).

Who is the only fighter to beat Ataman in MMA?

Rafael Fiziev holds a good record in kickboxing where he has had 47 fights in total. He has won 39 of them while losing only 8. Rafael has retained his class following his transition to MMA as well. The fighter has a UFC record of 5-1 and a career record of 11-1. The only blemish of his MMA career came in his very first UFC fight.

On April 20th, 2019, Fiziev made his UFC debut against Magomed Mustafaev. The contest only lasted a grand total of 86 seconds. Hence, it was not an accurate representation of Fiziev’s true abilities. However, a loss is a loss and Magomed landed a massive spinning head kick that put Fiziev down. Magomed followed it up with strikes and finished him on the ground.

Which country is Rafael Fiziev from?

On March 5th, 1993, Rafael Fiziev was born in the Korday region of Kazakhstan. His mother is Russian while his father hails from Azerbaijan. But he currently has citizenship in Kyrgystan. Fiziev also spends a significant portion of his time in Thailand because of his affiliations with Tiger Muay Thai in Phuket. Hence, Fiziev is a man of many cultures.

In an interview with The FIGHT LIBRARY in 2020, Fiziev revealed that he was not interested in combat sports at all while growing up. But it was his father who pushed him at a very early age to take up the boxing gloves. He revealed that choosing to train in Muay Thai was a decision that he had to make. After his family moved to a different place, Fiziev was getting bullied. Hence, he started practising martial arts.

He had a lucrative opportunity to become a part of the Kyrgyzstani Internal Affairs. But Rafael turned down the opportunity in order to pursue a career in fighting and the rest is history!