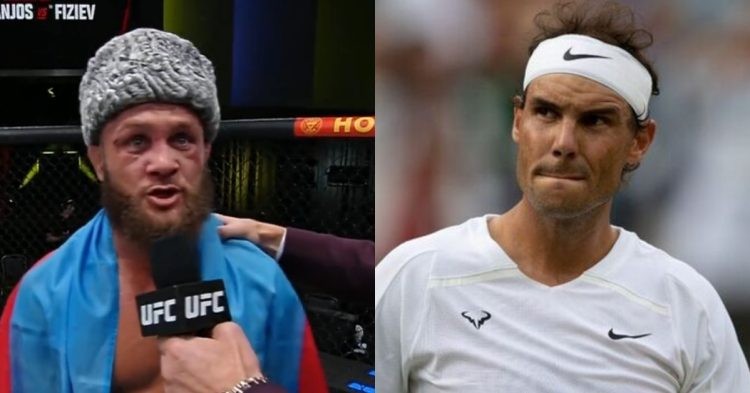 Rafael Fiziev calls out Rafael Nadal after beating Rafael Dos Anjos at UFC Vegas 58. Dos Anjos and Fiziev faced each other in the main event of the card. The fight almost went the full distance, but Fiziev landed a brutal left hook which floored the former champ. Fiziev then followed it up with a few more shots and finished Dos Anjos off on the ground.

Coming into the contest, there was a lot of discussion about who the best Rafael is in the UFC. While RDA previously held the belt at lightweight, he is clearly at the final stages of his career. Fiziev on the other hand, is much younger and very fresh in his MMA career. In a sense, it was a battle of the old guard vs the new. Although RDA fell short, he did not go out without a fight.

The 20:18 minute contest was a very close one until the finish. Fiziev showed why his kickboxing is amongst the elite in the division. However, RDA also went toe to toe with every strike that Fiziev threw. Late in round 4, Dos Anjos landed a takedown and dominated Fiziev on the mat. Just when it seemed like RDA was on his way to a decision victory, Fiziev pulled out a stunning stoppage.

Naturally, he was ecstatic following the biggest win of his career. Talking to Michael Bisping in the post-fight interview, Fiziev stated that he has finally shown who the best Rafael in the UFC is. He then proceeded to call out tennis superstar Rafael Nadal.

Who does Rafael Fiziev want next in the Octagon?@RafaelNadal 😅 pic.twitter.com/3Btfo5b82u

Netizens had nothing but good things to say about Rafael Fiziev’s win over Rafael Dos Anjos. After this win, he will go much closer to the Top 5 of the division. With his dynamic striking and good defensive grappling skills, he will certainly be a headache for the rest of the division in the UFC. From Alexander Volkanovski to Dustin Poirier, here’s what everyone had to say about him.

@RafaelFiziev is always a treat to watch, the man can scramble so I expect this to stay on the feet majority of this fight. Should be fun 👏 #UFCVegas58

Fiziev is so fast

That was so insane! 🤯 @RafaelFiziev #UFCVegas58

Rafeal Fiziev is an animal. #UFCVegas58

However, the bantamweight champion Aljamain Sterling is not too impressed by the stoppage. He wanted the ref to give RDA more time to recover. But he lauded Rafael Fiziev for his performance.

Idk. I feel like fighters go limp all the time and “come-to” really quick. It’s a fight, isn’t it? Take some and give some.

I do think RDA was hurt BAD, but I kinda wanted to see “if” he could recover or not. That’s the game we play tho. Game of inches. Great win Fiziev!

Do you agree with Sterling’s assessment of the fight? Was the bout stopped early or did the ref make the right call? Let us know in the comments below.