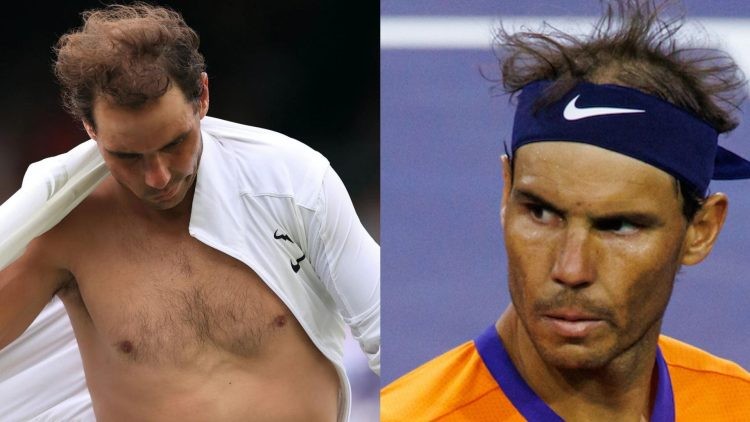 Over the years, Rafael Nadal has achieved a lot and currently holds a record 22 Grand Slam titles to his name. However, it goes without a doubt that Nadal would have achieved and won more titles if his career hadn’t been plagued by so many potential career-ending injuries.

His injury jinx came back to haunt him in the ongoing Wimbledon 2022 after he had to withdraw from the semifinals against Nick Kyrgios after he got himself an abdominal tear. Rafael Nadal has potentially missed out on more than 11 Grand Slam titles from his debut in 2003 due to injuries.

He also directly pulled out from an ongoing Grand Slam five times. Compared to him his rivals have suffered much less from injuries, especially during their prime.

For instance, his current main rival Novak Djokovic had made an appearance in all the Grand Slam titles from 2005 until 2017 when he had to miss out on the US Open due to an elbow injury.

This meant that he had a clear run for 51 major tournaments without any injury. Nadal has seen it all in terms of injuries. He has suffered from a set of knee and foot issues, hamstring pulls, tendon tear in the wrist and not recently an abdominal tear.

Let us have a look at some of the matches he had to withdraw from due to a severe injury.

Rafael Nadal was a six-time grand slam champion when he was playing the Australian Open in 2010, for which he was defending champion and also the second seed. He was supposed to play Andy Murray in the quarterfinals. Rafael Nadal was in red hot form as he just had two consecutive four-set wins in the previous rounds.

Andy Murray was also in good form and he hadn’t dropped a single set in the tournament. After two hours and thirty minutes worth of play, Nadal had to call it quits due to a critical knee injury. However, the 2010 season was good for Nadal as he went on to win a career gold slam.

Rafael Nadal was the top seed in 2018 Australian Open and he was also the crowd favourite. He had won 16 grand slam titles by 2018. However, he did not have the expected start to the 2018 season. He was all set to face Marin Cilic in the quarterfinals and the odds heavily favoured Nadal.

After the third set which was won by Rafael Nadal, he had to take a medical timeout. He was clearly in pain and eventually had to retire owing to a hip injury almost after 4 hours’ worth of game time.

Rafael Nadal was the top seed for the US Open 2018, and he was coming after winning his 17th total major after having won yet another French Open title. He had a very tiring campaign on the grass court at Wimbledon. Del Potro was in pretty good shape since he had only dropped one set en route to the semifinals.

Rafael Nadal was already spotted with tape on his knees and was evidently struggling for movement.  After the two sets, Nadal had to retire from the match and hand over the win to Juan Del Potro.