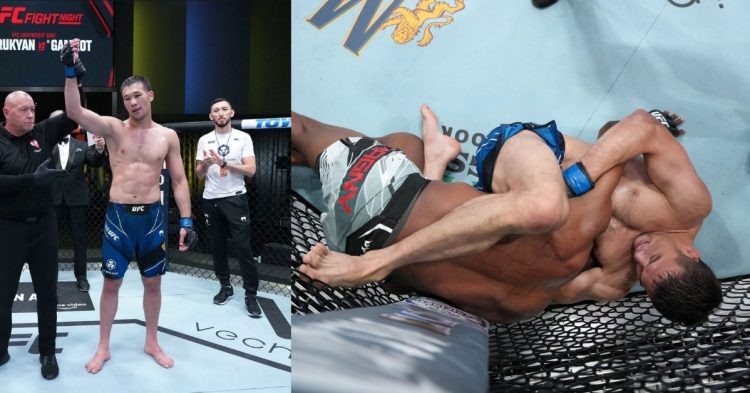 The win streak continues as Shavkat Rakhmonov submits Neil Magny at UFC on ESPN 38. The 27-year-old will break into the top of the UFC welterweight division with the dominant win over Magny.

Shavkat Rakhmonov was on looking to pursue his 4th win and finish in the UFC after beating finishing Carslton Harris, Michel Prazeres and Alex Oliveira. Despite being ranked no. 15 in the division, Rakhmonov had a lot of hype surrounding him.

Neil Magny on the other hand has been a part of the UFC since 2013. He has been inside the Octagon against some of the best 170lbs fighters in the history of the company. Hence it was not an easy task to run through such a veteran fighter who has had 26 fights in the company.

But Rakhmonov started the bout in a very positive manner. In round 1, he caught a leg kick from Magny and took him down to the mat. Shavkat seemed very comfortable on the ground against Magny early on. But Neil did have some decent up kicks and made Shavkat a tad bit uncomfortable. However, he made some changes to avoid that in round 2.

Similar to the first round, Rakhmonov did not have any difficulties in taking Magny down to the ground. Unlike the previous round, he stayed close to Magny instead of trying to mount The Haitian Sensation and land ground and pound. With seconds to go in the round, Rakhamonov locked in a guillotine choke and finished Magny off.

After the fight, he called out Stephen Thompson. Nomad stated that it’s a good fight for his next contest. He also addressed the UFC President Dana White and stated he will be a champion in the future.

With this win, Shavkat Rakhmonov remains unbeaten and extends his winning streak to 16 in a row. He also maintains the stoppage win record of 100% with 16 finishes. With such impressive stats, he has caught the attention of the UFC roster. From welterweight contender Belal Muhammad to middleweight fighter Derek Brunson, Shavkat Rakhmonov has impressed everyone with his dominance.

That man is damn good 🔥 #UFCVegas57

Shavkat Rakhmonov is for real . I was shocked how good he was in all positions when training with ! #UFCVegas57