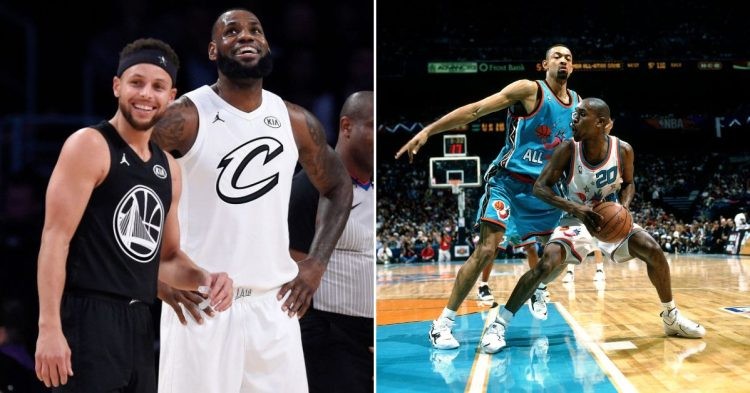 The NBA All-Star games have provided us with some beautiful and aesthetically pleasing jerseys over the years. We have seen our favorite NBA stars don the outfits where they have sent a statement to the rest of the league. The All-Star game is an event that takes place every year where players face off against the best in the NBA.

For such an occasion, only the best jerseys could possibly be produced. With that said, let’s look at the best five jerseys in the history of the NBA All-Star games.

Did the 2018 NBA All-Star game produce the best jerseys?

We have seen many appreciable jerseys with unique designs until now. But there have been some that stand out among the rest, and some, not so much. Fans have expressed their liking to some of these threads, in terms of how the game was and how their favorite players looked. Some jerseys stood out more than the others, and with good reason too.

2018 was an entertaining year for basketball fans. The Golden State Warriors swept the floor clean in the NBA Finals after winning the series 4-0. However, it was a great year for the fans who look forward to the All-Star weekend the most. We witnessed simple yet beautiful jerseys come into play that year.

The norm was that players would wear the same jerseys during the game. But that year, the Jordan brand came up with jerseys that featured each franchise’s logo at the front. They only released it in black and white, which many believed was too simple. That was until we saw our icons wear it on the court.

It was a close game, as LeBron James‘ team took a narrow win (145-148). The King put up a double-double, along with a commanding effort from Damian Lillard, Giannis Antetokounmpo, and DeMar DeRozan from Team Giannis.

There would not be a list about the All-Star game’s jerseys where we leave out the ones from 1996. When we think of the most unique designs, the threads from that year will probably be the first ones to appear in our minds. The colors were dorky, goofy, flashy, or even eye-catchy if we put it simply.

That was the last year before the NBA decided to opt for the franchises’ jerseys to be worn during the All-Star games. Although it was appreciated by some of the NBA community, we lost the opportunity to see some new designs.

The jerseys from the 2012 NBA All-Star game narrowly missed the top spot. They were arguably the best jerseys if we’re being honest. The main reason for that matter would be the red and blue colors that represented the East and West.

Together with that, we saw a prime LeBron James go against Kobe Bryant, who touched legend status at the time. In that game, Kevin Durant helped the West take the win with 36 points, and had the help of the Black Mamba, who contributed with 27. KD took the All-Star MVP award as well.

Just like the 2018 jerseys, the uniforms from the 2015 All-Star game were also pretty unique and simple at the same time if we are being honest. There are times we might prefer subtleness over the flashy designs. The jerseys didn’t feature many details, just some dual-colored lines on the sleeves, and the players’ numbers at the front. All-Star games were always evenly biased, and it wasn’t any different that year.

The West won the game 158-163 under Russell Westbrook’s leadership after he dropped 41 points on the night. For the East, LeBron James and Kyle Korver were the best performers.

The 2008 NBA All-Star jersey holds the fourth spot in our list, as the East and West sides wore blue and white colors respectively. It is widely regarded by many as one of the best jerseys we have seen so far.

The uniforms did not feature that much of glitter or glow, their colorways were kept simple and to the point. Although we have seen some of the former in the NBA, it might be unique to have some designs that are not as flashy. The looks of the jerseys are subjected to each one’s opinion at the end of the day, as the style and designs we all prefer differs from time to time.