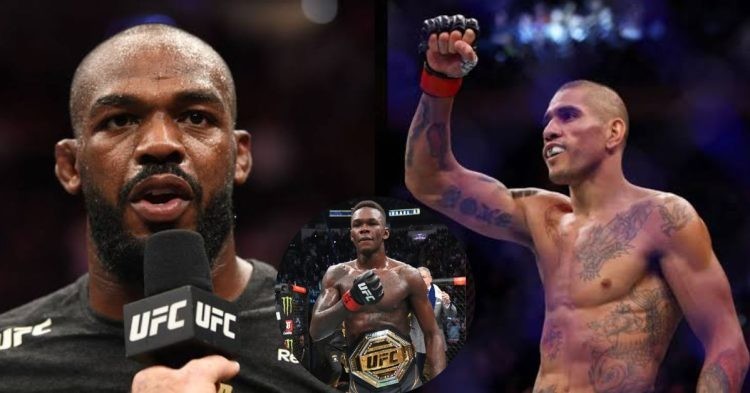 The Last Stylebender cruised through the fight with his impressive striking and defended his title for the sixth time by unanimous decision. Former UFC light heavyweight champion Jon Jones was one of the well-known stars who criticized Izzy after the main event and sounded off on social media.

Jones posted a couple of tweets on his Twitter page where he laughed off at Israel Adesanya’s post-fight warning to Alex Pereira and also gave an early prediction of how that fight would go down.

Bro I can’t stop thinking about this shit. How are you going to threaten a guy like Alex with glossy fingernails and a frozen reference. I’m over here scratching my head. 😆😩

He praised the Poatan for his stellar first-round knockout win over #4 middleweight contender Sean Strickland and has offered him his support.

Bro I just went back and watched Alex P fight!! Yeah I’m riding with him all day. He made it look way too easy. Really hard to believe he was unranked before this fight

Adesanya and Jon go way back as the two UFC champions were rumoured to fight each other a few years ago. As soon as the rumours of their fight started floating around, both Izzy and Bones started taking a dig at each other. They have constantly talked trash about each other on various social media platforms and it looks like the beef is not over despite Jones moving up a weight class.

After putting on a show for the crowd with the Undertaker walkout and successfully backing it up with a unanimous decision win over Jared Cannonier at UFC 276, Israel Adesanya sat down in front of the media in the post event press conference.

During this interview, The Last Stylebender admitted that it was an off night for him despite getting the win. Later in the interview, one of the interviewers tried to ask Izzy for his thoughts on Jon Jones’ comments about his appearance on social media. Adesanya didn’t waste any time and told the reporter to move on and ask other questions.

“F**k Jon Jones. I don’t want to hear about that bitch. What is he gonna talk about my nails now? He is just jealous and insecure, he’s a f***boy, he could never rock shit like this, he’s a bitch. F**k him, I don’t give a f**k what he thinks.”

It was quite visible that Adesanya was tired of all the talk from Jon Jones about his nails and him backing up Alex Pereira. Hence it is needless to say that Izzy will look to prove his doubters wrong when he squares off against the Brazilian in the future.