The Phoenix Suns have won the Western Conference Finals. By doing so, they have made the NBA Finals. They are now 4 games away from the ultimate prize. They are set to face Milwaukee Bucks in the Finals on June 6th 2021. Devin Booker and the young Phoenix Suns squad have made the finals in their first postseason. Additionally, Chris Paul was injured in the first round of the playoffs. They now look forward to a matchup with Giannis Antetokounmpo and the Milwaukee Bucks.

Milwaukee Bucks eliminated Atlanta Hawks on the road in 6 games last night. The duo of Khris Middleton and Jrue Holidays were too heavy to bear for Atlanta Hawks even though their star player Trae Young returned to the court. Giannis Antetokounmpo however decided to remain sidelined and heal completely. He is likely to make his NBA Finals debut on Monday against the Phoenix Suns

Also Read: How Many Times Did Michael Jordan Retire From the NBA?

How do the Phoenix Suns match up with The Milwaukee Bucks?

The Phoenix Suns won both games against the Milwaukee Bucks in the regular season. However, both games went down to the wire. Additionally, the second game went into overtime. The Suns won that game 128-127.

The Phoenix Suns primarily rely on Chris Paul and Devin Booker. They are primarily responsible for playmaking down the stretches of pivotal games. Jae Crowder, Torrey Craig, Cameron Payne and Mikail Bridges have all become more efficient with Chris Paul on the court. However, it is Deandre Ayton who has benefited the most from Cp3. Standing at 6’11, Ayton will be entrusted with the task of guarding the Greek Freak.

The Milwaukee Bucks have come further into the postseason than ever before. Additionally, Giannis has taken a deeper step each year in the playoffs towards a championship. The Bucks acquired Jrue Holiday from the New Orleans Pelicans. By doing so, they gave the team an additional playmaker. Holiday has taken over the facilitation of the Milwaukee Bucks offence in several crucial games. 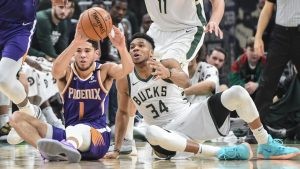 The Bucks rely on the Greek Freak to set the screen and engage in the pick-and-roll offence. Giannis commands so much presence on the offensive end of the floor. This has led to the Bucks being one of the best three-point shooting teams in the regular season. Additionally, both Khris Middleton and Jrue Holiday are too large for Chris Paul to guard consistently.

The Milwaukee Bucks rely on their size to create space. This is opposed to the Phoenix Suns, who rely heavily on their guards

So who will win Bucks or Suns?

The Milwaukee Bucks and Phoenix Suns’ potential series is expected to go down to the wire. It is very difficult to say for certain which team will win. However, The Milwaukee Bucks are in a predicament. The Greek Freak injured his knee in game 4 of the ECF.

Giannis Antetokoumnpo has proven that he is the best basketball player on the court through several pivotal games in these Playoffs. His presence and health will ensure that the Milwaukee Bucks win the NBA Finals. However, if the Greek Freak reaggravates his injury, or is not healthy for the NBA Finals. It is almost a certainty that the Phoenix Suns will win the championship.

Also Read: Is Trae Young Going to Play in The Must-Win Game 6 of the ECF vs The Milwaukee Bucks?