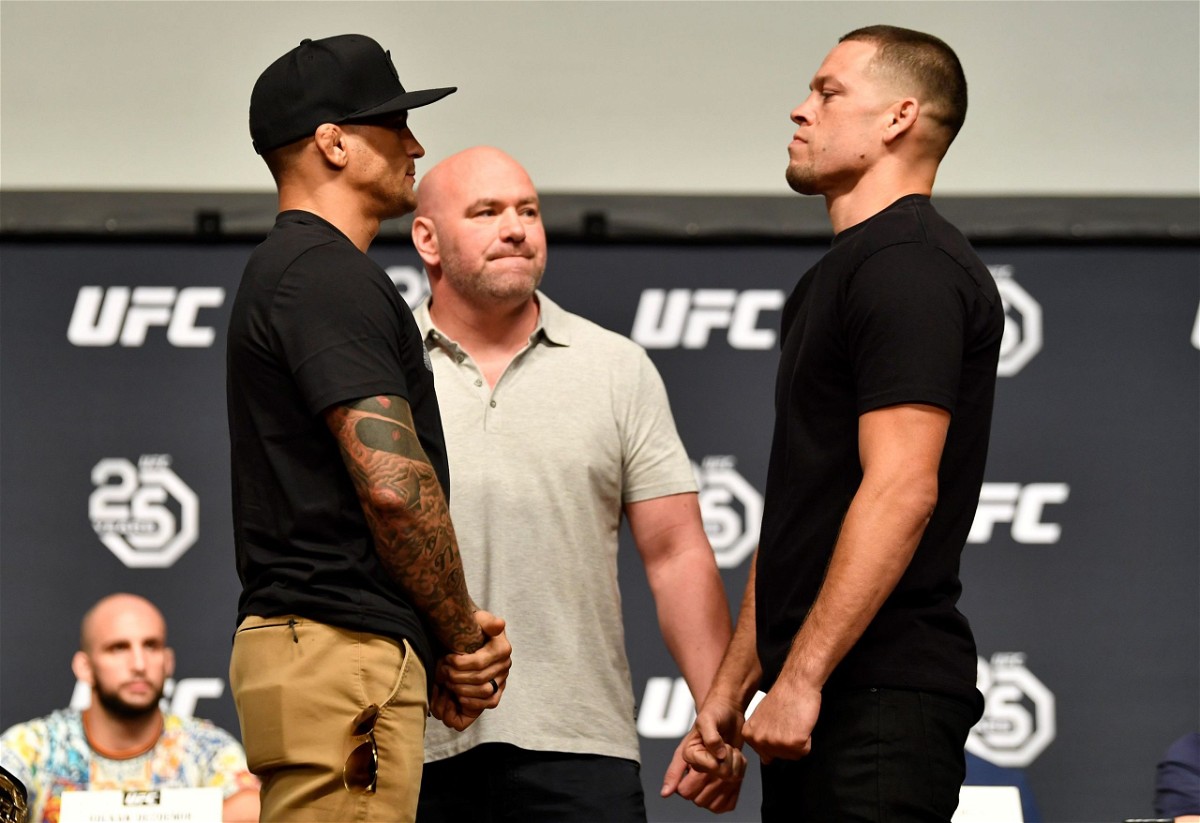 According to a recent report, Nate Diaz vs Dustin Poirier is no longer in development. Ever since Dustin Poirier lost to Charles Oliveira on UFC 269, his contemporary fighters have called him out. The list includes Conor McGregor, Colby Covington and Nate Diaz. Although there weren’t any serious discussions about any kind of a contest with the first two, Nate Diaz was a real possibility to be Dustin Poirier’s next opponent.

Both Diaz and Poirier sounded excited about the idea. They did a great job of selling the contest to the audiences with the constant back and forth on Twitter. Recently, the 32-year old appeared on the ‘THE FIGHT with Teddy Atlas’ podcast and confirmed the news that Nate Diaz was next.

However, the 36-year took to Twitter to add that UFC is not interested in booking the fight. Nate Diaz revealed that he inquired the promotion regarding the fight with Poirier. But He did not a get a positive from the UFC.

I just talked to the ufc I said wassup with the Dp fight I wanna fight asap but they said dustin sucks and they don’t want it sorry Dustin you suck hope to fight asap tho let’s do this ????????
Ps Olivera you suck too

Although one would think this is just another promotional tool from the fighter to hype up the eventual showdown, it turns out, Nate Diaz was actually revealing the truth. As per a report from Damon Martin of MMA Fighting, UFC has refused to book a short notice fight between the two mega-stars.

What is next for Nate Diaz and Dustin Poirier?

For a while, it seemed as if though the showdown between Dustin Poirier and Nate Diaz was all but confirmed. But as the recent report suggests, the fight is no longer a probability in the near future. Although it is not clear as to why UFC made the call, it would not be surprising if the promotion decides to revisit the rivalry down the road.

Despite the falling through, both competitors have various options open for them. A fight against Conor McGregor is certainly more than a real possibility. It will provide an opportunity to earn a massive paycheck. Nate and Conor have one win each. Hence a trilogy will always be a big fight. In the case of Dustin, the last fight between him and the Irishman ended after a brutal injury to the latter. The storyline for the 4th fight is an intriguing one if UFC wants to exploit it.

But that is not the only option for both fighters. Dustin Poirier can opt to fight Colby Covington. The two were friends who turned into bitter enemies. Both have expressed interest in fighting the other. Nate Diaz on the other hand might leave the UFC to opt for a big-money celebrity boxing match with Jake Paul.