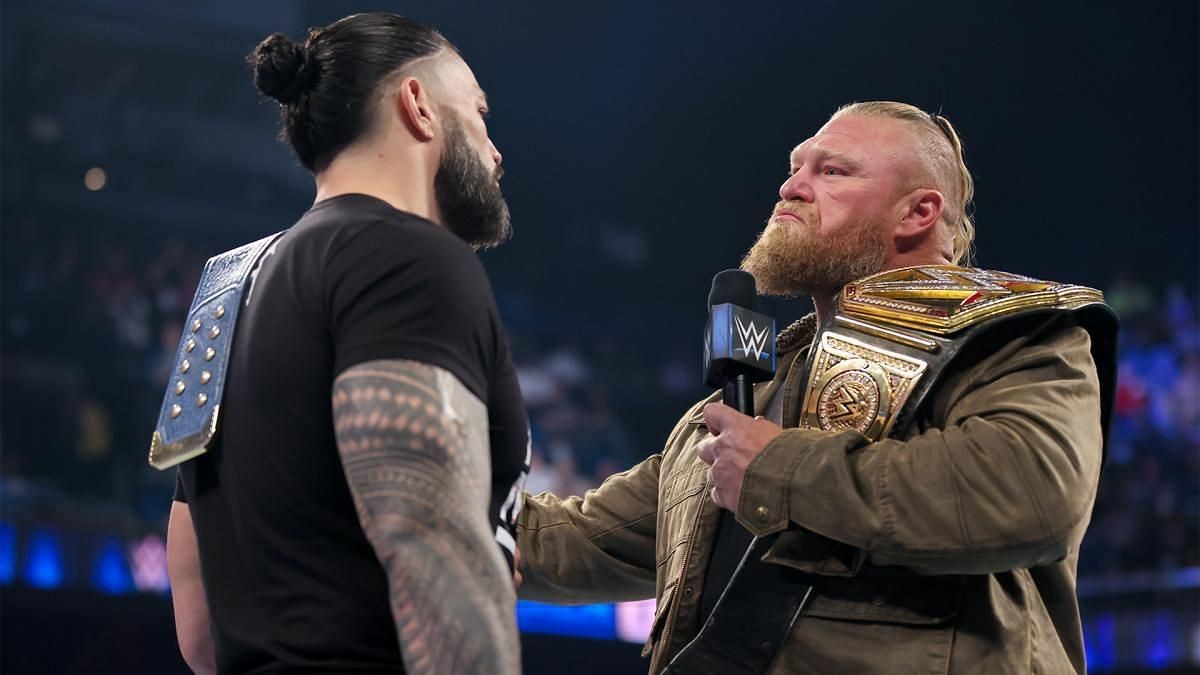 Ever since WWE confirmed Roman Reigns vs Brock Lesnar for WrestleMania 38, fans have been wondering; what’s going to happen to the WWE Championship? The Most Prestigious Prize in Sports Entertainment has a lineage that dates back to 1963. And given that Vince McMahon‘s company is all about its own history and accomplishments (for the most part), we can’t see him getting rid of the championship in any scenario imaginable. So what happens now?

The WWE Championship has been “unified” twice before

To be fair to the Big Dub, they’ve navigated this kind of a situation twice already; and one of them directly involved Lesnar! At Vengeance 2001, Chris Jericho defeated The Rock and unified the WWE and WCW Heavyweight Championships as the Undisputed Champion.

While a brand new title was created by the company after Triple H defeated Y2J at WrestleMania X8, the Big Gold Belt was back on TV after SummerSlam 2002. A similar thing occurred when Brock Lesnar unified the WWE and World Heavyweight Championships in 2014, leading to the creation of the Universal Championship. If you notice, a pattern emerges; no matter who “unifies” the titles, Vinnie Mack’s multi-billion-dollar company has always had 2 World Championships.

Dave Meltzer of the Wrestling Observer Newsletter has revealed that unifying WWE’s top championships is not on the cards, no matter how much the fans might want it.

“I was told it was not feasible in the modern environment to not have each brand, given the two networks, not have a champion. So this will be a unification match and then they will – not forget about it – but there will be two champions.”

The same was the case for WrestleMania 35’s main event, as well. While Becky Two-Belts was the hottest thing in Sports Entertainment at the time, she never actually unified her titles. Even Keith Lee, who won the NXT and North American Championships at the same time, relinquished the mid-card title to take his place in the main event; however brief it might have been.

The rise of #Becky2Belts is a #WrestleMania moment no one will forget, including #BigTimeBecks herself, @BeckyLynchWWE.

Catch the #WWERaw Women’s Champion in action at @ATTStadium on April 2 & 3 and make your own #MyWrestleManiaMoment!

WWE has hyped Reigns vs Lesnar as the Biggest WrestleMania Match of All Time. While we can’t deny that the match itself is going to be a one-of-a-kind spectacle, we think the outcome is pretty much set in stone. On the bright side, if Roman does win the match, we’ll get to see the WWE Championship in a more-featured role. And it also sets up the stage for the unstoppable Tribal Chief to actually lose to someone significant, without tarnishing the legacy of his historic reign.