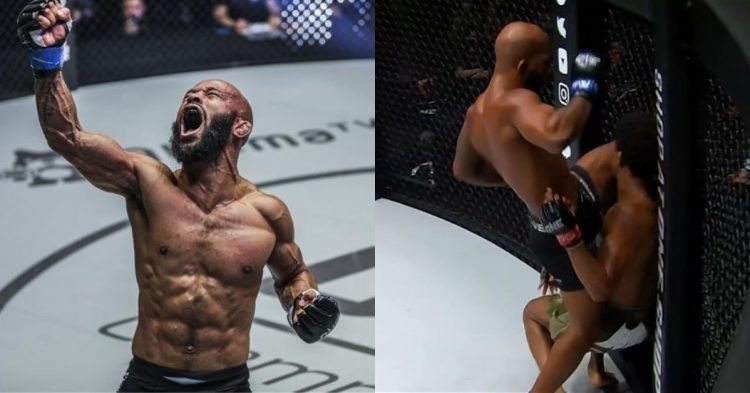 Demetrious Johnson gets his sweet revenge as he knocks out Adriano Moraes at ONE on Prime Video 1. DJ lost his belt to Moraes on April 7th of 2021. Moraes KO’ed the former UFC flyweight champ with a knee on the ground. Johnson has finally returned the favour as he defeats Adriano with a flying knee himself.

Coming into the fight, DJ was a slight underdog. He is 36 years of age and not many thought he would be able to recover from the brutal KO loss in the last fight. But Mighty Mouse, one of the greatest MMA fighters, had other plans. Ahead of the fight, DJ revealed that Moraes’ height gave him a lot of problems in the first fight.

However, it looked like he was prepared for it and altered his game plan accordingly. He was aggressive and took his chances throughout the course of the fight. In the fourth minute of round 4, he threw a right hook which rocked Adriano. DJ did not take his off foot off the gas and followed it up with a massive flying knee which put Moraes out for good.

DJ is now a two-time ONE Championship flyweight champ. Although he may not be a part of the MMA GOAT conversation, his resume speaks for itself.

Ahead of the rematch against Adriano Moraes, Demetrious Johnson trained alongside Henry Cejudo. DJ’s last UFC fight was against Cejudo where Triple C beat him via split decision. However, they buried the hatchet and decided to train together.

Following the win, Henry took to Twitter and shared a video of his reaction to DJ’s win. He was absolutely ecstatic to see his rival-turned-friend win and get his title back. Cejudo also claimed that Demetrious is one of the P4P greats. Henry revealed only Jon Jones is ahead of him on the GOAT list.

Here are some of the notable reactions from Twitter.

Mighty Mouse is still killin it

Mighty Mouse got his lic back

This made me want to get up and train. https://t.co/Aq6oPdYYuC

The ufc traded this man for Ben Funk Askren. In retrospect, that was a mistake 😂 #ONEChampionship

DJ just threw a knee from hell. Looked sensational, despite being undersized. I could watch that guys technique all day and geek out over it in slow mo

What are your thoughts on the fight? Do you think Cejudo is right about Demetrious Johnson being the second greatest MMA fighter of all time? Let us know in the comments below.