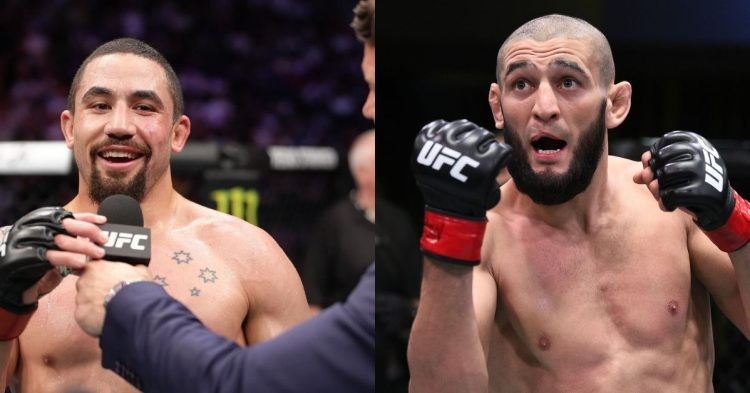 In a world where Israel Adesanya doesn’t exist, it goes without saying, Robert Whittaker is a dominant UFC Middleweight Champion of the world. The Australian mixed martial artist continues to soar through the UFC’s middleweight division with such ease that it’s hard not to call him a Champion.

The former UFC middleweight champion of the world sits comfortably at the #1 spot in the rankings, having eclipsed almost the entire division. Last seen in a dominant outing against Marvin Vettori, Whittaker is currently without a fight booked to his name. The former champion is eyeing Alex Pereira if he gets past Israel Adesanya later this year.

However, Whittaker says he won’t be surprised if the UFC decides to hand Adesanya a rematch instead. “But it wouldn’t blow my mind if they give Adesanya the rematch first. He’s a UFC cash cow and I’m sure they want to keep it going.” Whittaker said.

Bobby Knuckles is not scared of anyone. The former champion has time and again proved his credibility inside the Octagon, and believes it would be a mistake if UFC decides to offer him up-and-coming Khamzat Chimaev instead.

“And let’s be honest, if you’re trying to build a fighter you don’t put them against me,” Whittaker said. “I’ve deflated the UFC’s tyres too many times … they won’t want to do that.” He further added.

Even Chimaev has noted that he doesn’t want to fight Whittaker and has nothing but respect for the former champion.

“I want to train with that guy. He’s really good, like one of the best guys in the world. I was watching his fight. … I’m a big fan, so I watch all things. I watch how he trains, and all these things. A lot of guys want to fight me, so Robert never said something bad about me. There’s a lot of guys talking sh*t about me. I’m gonna go take their heads off, you know? So, we’ll see.” Chimaev had said about Whittaker following his win over Kevin Holland at UFC 279.

Robert Whittaker has set himself apart from the entire division, and as it stands right now, only super fights make sense for the former champion. Another name that has come up in discussions regarding Whittaker’s next opponent is none other than Colby Covington.

“Doesn’t deserve a fight with me,” Whittaker announced. “But I’ll smash Colby for a couple of extra bucks. Do it for fun.”

Having fought the best of the best, Whittaker is not scared to step inside the Octagon against absolutely anyone. So it’s on the UFC what they want to do with him. Feed him a youngster, and lose his hype? Or make a fun scrap against Covington for some extra bucks. Only time will tell what lies ahead for Whittaker, but it’s safe to say, put some “extra bucks” and Whittaker will be ready to dismantle his next opponent.