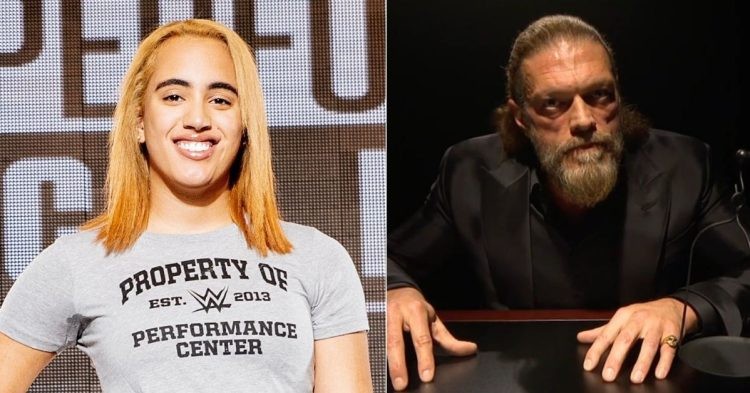 WWE Hall of Famer Edge has repeatedly teased the addition of a fourth member for his Judgment Day stable. He has gone on to tweet pictures of several WWE superstars as potential members of the group. Now, Edge has teased WWE Legend The Rock‘s Daughter Simone Johnson (Ava Raine) as the latest member of Judgment Day.

The tweet has caused a lot of stir and has grabbed a lot of attention. Simone Johnson has responded to Edge’s Judgment Day tease in a tweet of her own.

Johnson responded to Edge by simply asking him to let her know. Johnson will go by the name Ava Raine when she debuts for WWE. She signed with WWE in 2020. She signed with the company after training at the Performance center for several months. Simone Johnson has also indicated that she wanted to join Judgment Day a few weeks ago.

She praised Rhea Ripley when she joined Edge’s faction and stated that the Australian star was living Johnson’s dream. There is already a lot of expectation from the fourth-generation wrestler. It would be a big step for her and a great learning experience to grow as a WWE superstar under Edge’s wing.

Simone Johnson is the eldest of three daughters of the Rock. The Great One has always showered his praise on his daughter for getting into the pro-wrestling business. But Simone’s career is expected to be a success due to being the first-ever fourth-generation wrestler.

The Maivia-Anoa’i family is the most legendary family not only in WWE but in the entire industry. Primarily in WWE, they have given us many successful superstars like Yokozuna, Rikishi, Roman Reigns, and Simone’s father, The Rock.

Simone Johnson had responded to people who criticized her WWE ring name since it didn’t emphasize her family’s wrestling heritage. She stated that she wanted to be unique and forge a path on her own.

Despite the rumors of Judgment Day adding a fourth member, it is still not clear whom WWE will add to the faction. Many speculated that Ciampa would be the most obvious addition to the group, but Edge’s repeated teases have made it all the more interesting to discuss the potential fourth member.

What do you think about The Rock’s daughter joining Judgment Day? Drop your comments below.