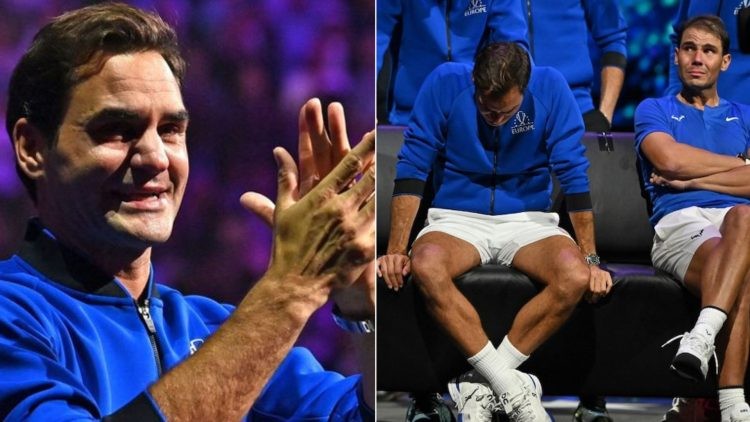 Roger Federer and Rafael Nadal have consistently performed on the big stage and dominated the sport for more than a decade.

The time has now come for one of them, Roger Federer to bid adieu to the sport of tennis. Roger and Rafa have faced other in the most intense final matches multiple times, however, they have walked away with mutual respect and honour for each other.

Their rivalry not only made the sport exciting for fans but also taught everyone a lesson on sportsmanship. Even after all these years and the obvious expectation that Roger would soon be retiring, nothing could have prepared us for this moment.

Federer finally hung his boots and dropped his racket after his double loss against Jack Sock and Frances Tiafoe, however, the takeaway from the match was that he lost this match with his friend and rival Rafael Nadal alongside him. Roger Federer was visibly distraught after the match and in the post-match interview he stated,

“I enjoyed tying my shoes one more time … the match was great. I couldn’t be happier. It’s been wonderful. And of course, playing with Rafa on the same team and having the guys – everybody here, all the legends – thank you.”

He reflected on the perfect journey of his tennis career and also paid tribute to his dear wife Mirka.

The evening of Federer’s match was emotional from the beginning itself. It felt as if Roger Federer was bigger than the sport itself last evening. Roger and Rafa received a standing ovation from 17,500 people in the O2 Arena as they walked out to play the match.

How are we getting over this? @rogerfederer | @RafaelNadal | #RForever pic.twitter.com/cpOfSznp4X

Novak Djokovic was spotted recording the moments of the match and also fiercely supported his rivals and friends. Even though Federer was out for 14 months, he played extremely well and set the tone after winning the first set.

After the end, Nadal and Federer’s calm composure finally broke as they began to cry alongside each other. It seemed like a moment that could never have been scripted. Roger finally embraced his family as he left the court.