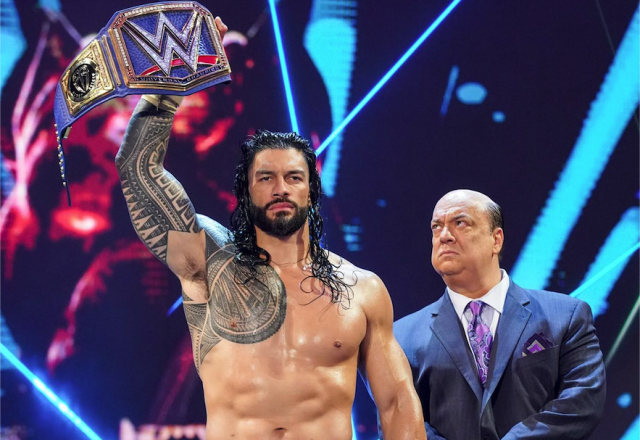 Roman Reigns broke character during the WWE SuperShow Live Event in Boston. On Sunday, January 09th, WWE held the Live event in Boston, Massachusetts. The Main Event of the show was between the Bloodline and the team of the Viking Raiders and Big E in a 6-Men Tag Team Match. The Bloodline won the match and for the closing segment, Roman Reigns thanked the fans for showing up despite the pandemic and wished everyone a safe trip back home.

Roman Reigns began his WWE main roster career as part of the popular faction, the S.H.I.E.L.D. He started as a heel along with his teammates Seth Rollins and Dean Ambrose. The fans’ highly positive reaction to the faction made WWE turn all three of them face. Out of them, Reigns has been the only one to stay baby-face. Ironically, he was showered with boos since then. Despite having several opportunities to turn him heel, WWE refused to do so. Reigns achieved a lot during his career, he became a GrandSlam Champion, had won the Royal Rumble and is one of the two superstars that defeated the Undertaker at WrestleMania.

Back in 2018, the entire Wrestling Universe was saddened by the news that Roman Reigns’ cancer had come back. In less than four months, he made his return and announced that he is in remission. This announcement was one of the wholesome moments in wrestling history.

In 2020, the whole world changed due to the pandemic. Given Reigns’ health condition he chose to quarantine himself. He made his shocking return at the SummerSlam PPV in August, 2020. Reigns returned as a heel and considered himself the best Samoan in the business and proclaimed to be the head of the table. He joined hands with Paul Heyman who gave Roman the nickname, ‘The Tribal Chief’. ‘The Tribal Chief’ is the best Roman Reigns we have ever seen. Reigns quickly won the Universal title and has held the title till date. He is the longest reigning Universal Champion.

The Importance of Breaking Character

Roman Reigns had never broken character in his entire career, until this past Sunday. As the Live event came to an end, Reigns appreciated the fans for coming to the show. It is rumoured that Reigns’ breaking character is intentional. WWE are known to test new gimmicks during the house shows to analyse the crowd’s reaction. Usually, the closing segment is done by the top baby-face in the company, and now that Reigns did the closing segment, it is possible that WWE are planning to turn Roman Reigns face again. Reigns is set to face Seth Rollins at the Royal Rumble. Seth Rollins is a heel and currently Roman Reigns is a heel as well. WWE usually prefers to not have any feuds between two baby-faces or two heels. So with that in mind, this might be the first step for Roman Reigns’ face turn.

So what do you all think? Would you be happy to see Roman Turn face again? Let us know in the comment section.

Checkout our other news stories: https://www.sportsmanor.com/ufc-news-video-khamzat-chimaev-goes-wild-at-mma-event-tries-to-fight-the-security/