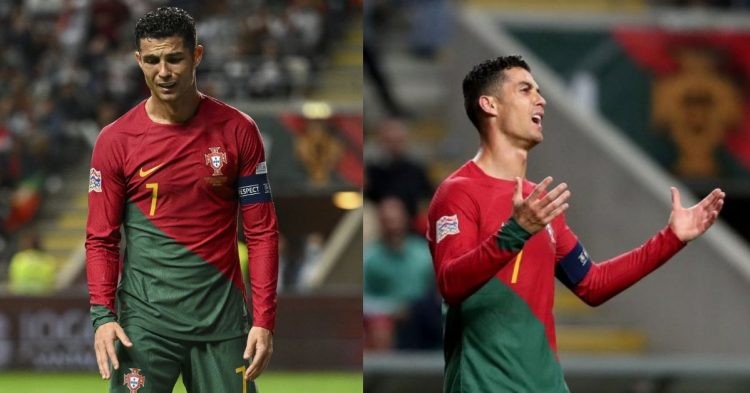 Cristiano Ronaldo is arguably the best football player of all time. With 816 goals to his name, Cristiano is truly one of the greats in the sports category as a whole. If that wasn’t enough, his international career is also nothing short of pure genius. He has found the net 117 times since making his debut in 2003.

Portugal recently competed in the 2022 UEFA Nations League, having won the 2019 edition of the tournament. Just a day ago, Spain knocked them out of the tournament, beating them 1-0 aided by an Alvaro Morata goal in the 87th minute. The 2016 European champions just needed a draw from the game to qualify for the next round.

During the game, Ronaldo had multiple chances to help his country take the lead. One of them included a clear cut chance, where Ronaldo only had to slot the ball home past the goalkeeper. But the Manchester United star didn’t see Spain’s left back Jose Gaya behind him. He tackled CR7 and passed the ball to the keeper. This was just one of the instances where Ronaldo could not capitalize on Spain’s defensive loopholes.

After the game, many fans all over the world have called out Cristiano and want him to retire. One said, “Ronaldo needs to retire ASAP. No idea what he’s still playing for.” It did not help his image when Ronaldo threw his captain’s armband on the ground, showing his frustration.

Ronaldo needs to retire ASAP. No idea what he’s still playing for.

A Twitter user tweeted, “why did he throw the captains armband?? It’s his fault his team didn’t qualify he had like 3 good chances that any decent striker buries at least 1 of them, he was awful, at least be respectful to your country.” It seems like the hate for Ronaldo is at a high now. And even Portugal’s manager has responded to it.

why did he throw the captains armband?? It’s his fault his team didn’t qualify he had like 3 good chances that any decent striker buries at least 1 of them, he was awful, at least be respectful to your country

During the post-match press conference, Fernando Santos said, “What interests me is how the team played. Ronaldo had three or four chances. Two very good ones, which he usually scores. He didn’t score. It’s football. This is the second time we’ve conceded a goal right at the end [after the loss to Serbia]. If we have to defend we should defend with everything. The players and I are devastated at the end of this game.”

“It wasn’t just Cristiano who failed. We all tried and we couldn’t. The Spain goalkeeper did very well. Cristiano is fine, with the ambition to help the national team, as he always has been and there is no need to make great stories,” Santos added.

CR7 is currently low on confidence due to not playing regularly for Man Utd and it seems like international break didn’t go well for him as well. Can one of football’s GOATs get back to form and prove his haters wrong?