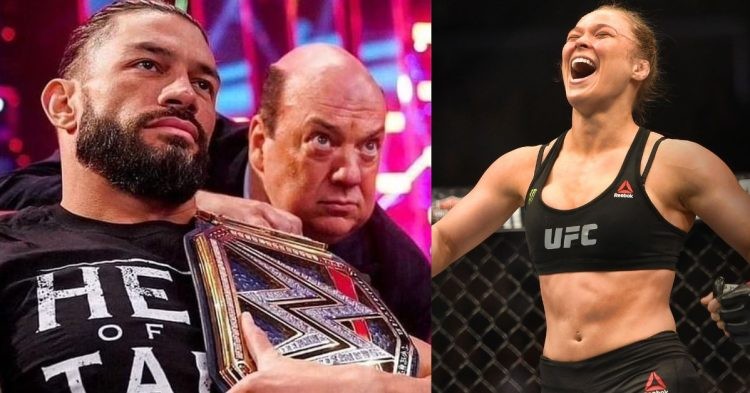 Ronda Rousey mocked on her YouTube channel how Roman Reigns should be acknowledging himself instead of seeking support from the crowd. After signing a new deal, Roman Reigns has been wrestling a lesser schedule. Since he mainly makes appearances at large live events, fans barely ever get to see him on weekly shows.

Roman Reigns, the Tribal Chief, has been a core part of the business and clearly serves as its current face. He defeated Brock Lesnar earlier this year, unifying the WWE championship with his Universal Championship. Roman Reigns has been carrying Smackdown on his own alongside his cousins “The Usos” and his Special Counsel Paul Heyman. Roman was also ranked first in the top 500 wrestlers in 2022 by PWI.

Ronda Rousey continued by making jokes about how they might have a potential feud: “I’ve accomplished more across more sports industries than anybody else. Maybe that’s not a bad thing to acknowledge. I acknowledge Roman Reigns, okay? That’s going to be if I and Roman Reigns ever have a feud. I’ll be like, Listen, that’s all it comes from you. No one needs to acknowledge you. You need to acknowledge yourself. And then he’s going to be like Oh My God Ronda thank you so much. I like totally see things differently now.”

Ronda Rousey on having Paul Heyman as her Manager

The reputation of Paul Heyman as one of the top wrestling minds in the game is well known. His mic skills and understanding of the wrestling business and ability to instantly grab crowds’ reaction has made him one of the best ‘mouths’ in WWE even in the whole wrestling industry won’t be an overstatement. In his most recent role as Roman Reigns’ “wise man” and advisor, he was key to the success of Brock Lesnar, CM Punk, and other wrestlers.

"This entire plant, the entire Universe, the Multiverse, the Metaverse belongs to the Island of Relevancy."@HeymanHustle | #SmackDown pic.twitter.com/2udycbUvhJ

When asked if she would be willing to work with Paul Heyman in the future during a recent gameplay stream, former SmackDown Women’s Champion Ronda Rousey quickly responded: “Definitely, without a doubt, without hesitation. I think he’s great, I’m very jealous he has Paul Heyman as his advocate.”

Fans have criticized Ronda Rousey for lacking mic skills and indeed making her character fail to connect with the audience. Various Fans and experts have suggested aligning Ronda with someone with good mic skills. Fans would want to see Rousey and Heyman work together because it would solidify Ronda as a legitimate professional wrestler.