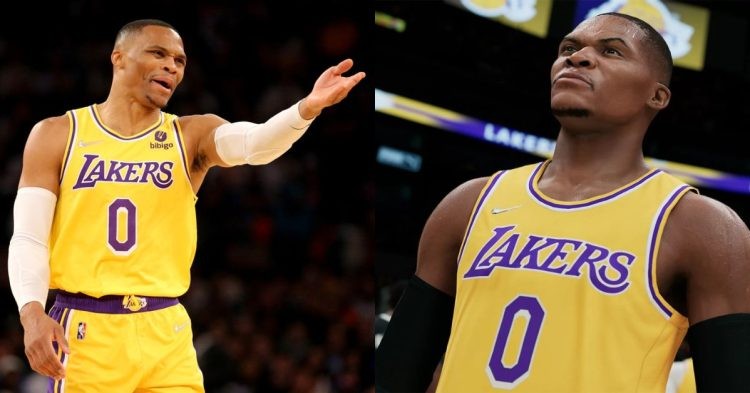 Russell Westbrook is the veteran point guard for LeBron James’ Los Angeles Lakers. He is widely considered one of the most athletic guards to ever play in the NBA. However, this season has been nothing but a struggle and a blight on his legacy.

Simply put, this has been one of the worse years of Russ’s career. We all know how seriously the NBA 2K creators take their player ratings. There is an expression that updating your resume is everything in professional sports. Athletes are treated for how they performed the previous year. Not for the cumulative legacy that was created over the years.

Thus, we should wonder how Westbrook has been rated and where he ranks in comparison to other NBA stars.

It seems that the harsh criticism against Russ has influenced the 2K creators into reducing his OVR in NBA 2K23. He has been given a 78 OVR. This is much lower than his other two teammates LeBron James and Anthony Davis.

The King has been given a 96 OVR for his excellent level of play entering Year 20 in the NBA. On the other hand, AD has been given a 90 OVR. This seems quite unfair. AD might certainly be better than Westbrook. However, he did not play for the majority of the season and was injured. That has not seemed to affect his ratings. Another player injured with a high rating is Kawhi Leonard with a 94 OVR.

NBA 2K23 seems to think Russell Westbrook is a player of much less caliber than the top superstars in the NBA. He averaged only 18.5 points, 7.4 rebounds, and 7.1 assists. These numbers might seem somewhat impressive. However, it is a significant drop off from his career average.

Russ also missed several buckets under the limelight in Los Angeles and was taunted with the nickname “Westbrick“. Additionally, he seemed to turn over the ball constantly and make bad decisions when on the court. All these reasons have led to his OVR being reduced to 78. Only a few years ago, he was given an OVR of 88 during his time with James Harden and the Houston Rockets.

Hopefully, Westbrook is able to have a revenge season this year and improves his ratings once again.