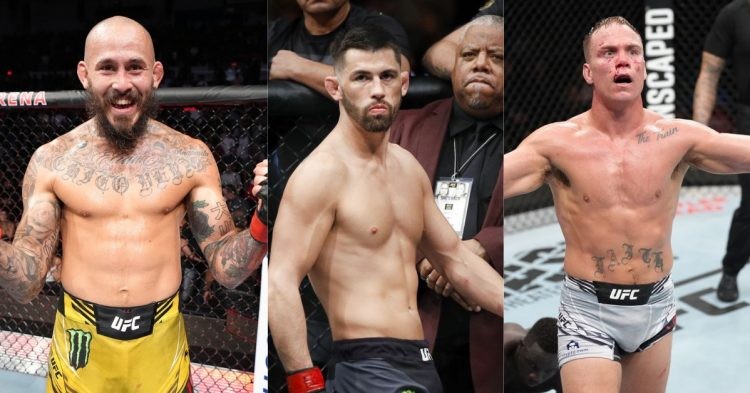 UFC San Diego was filled with several mesmerizing fights that kept the viewers on the edge of their seats throughout the evening. There were many celebrities and fighters like Paddy Pimblett, Brandon Moreno, and Luke Rockhold who were in attendance to witness this spectacular fight card.

Chito Vera headlined the event against Dominick Cruz and put on a terrific show for the audience as he became the first fighter to put the former bantamweight champion to sleep after landing a stunning head kick in the fourth round of the fight.

As per MMA Fighting’s report, for his brilliant performance at UFC San Diego, Marlon Vera collected $300,000 and topped the list of salaries. The above-mentioned fight purse of the Ecuadorian bantamweight also includes the $50,000 performance bonus. His opponent Dominick Cruz on the other hand, earned a total of $175,000 from his knockout loss against Vera.

As we move ahead let’s take a look at the fight purses of the highest earning fighters who competed in the UFC Fight Night: Vera vs Cruz.

Apart from the two main event fighters Marlon Vera and Dominick Cruz, there were three other fighters on the card that collected a six-figure paycheck. Women’s strawweight contender Angela Hill earned the second highest amount of money from this UFC San Diego event as she took home $190,000 for her unanimous decision win over Loppy Godinez.

Gerald Meerschaert earned a total of $146,000 for his impressive third-round submission win over Bruno Silva in the opening fight of UFC Fight Night: Vera vs Cruz. However, the highlight of the evening was the co-main event matchup between Nate Landwehr and David Onama that went to the distance.

Both the middleweights engaged in what was a brutal three-round war filled with action. In the end, Nate’s hands were raised by the referee as he edged past Onama via majority decision.

No question, @NateTheTrain and @DavidOnama145 earn your FOTN honors tonight!

This matchup won the fight of the night award and the winner of this bout Nate Landwehr earned a total of $110,000. Meanwhile, his opponent David Onama received $74,000 which includes the Fight of the night bonus.

In the women’s bantamweight fight, Priscila Cachoeira went all guns blazing and knocked out Ariane Lipski early in the first round. For this win, Cachoeira collected $80,000. Whereas Lipski earned 40,000 from this fight.

Light heavyweight prospect Azamat Murzakanov continued his dominance inside the octagon as he outclassed Devin Clark with his striking and finished him in the third round. Subsequently, Murzakanov earned $24,000 for his brilliant performance at UFC San Diego. His opponent Devin Clark received $75,000 for this three-round main card matchup.

Debutant Yazmin Jauregui maintained her undefeated MMA record as she overpowered Iasmin Lucindo with her striking throughout the three rounds to win the fight via unanimous decision. She attained a total of $50,000 for her win at UFC San Diego. On the other hand, Lucindo received $12,000 from her debut UFC fight.