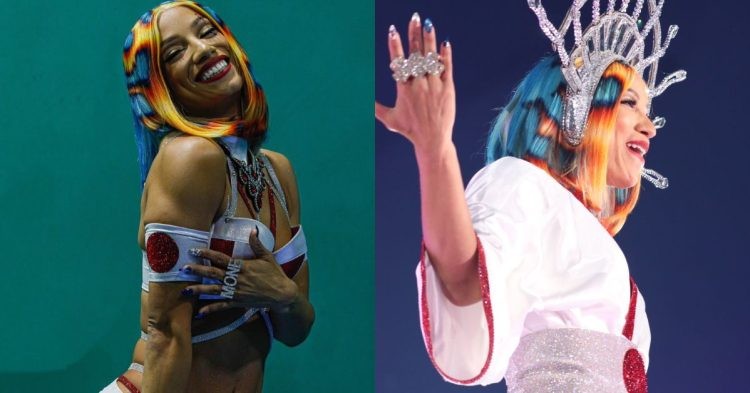 Sasha Banks made her debut as Mercedes Mone at the NJPW (Credits: Twitter)

Sasha Banks made her historic debut as Mercedes Mone at the NJPW’s Wrestle Kingdom. However, she was not the only WWE superstar to appear on the night.

This is what I want! #wk17 #njpw #STARDOM pic.twitter.com/P7OnKqbQSW

Sasha Banks’ former tag team partners Naomi and Bayley were both reported to be in Japan before the start of Wrestle Kingdom. According to ESPN’s Marc Raimondi, both women were spotted in the audience at Wrestle Kingdom 17.

Bayley was there for Sasha🥺!! #njpw #njpwworld pic.twitter.com/i3tfWhnK98

The IWGP women’s championship match between Kairi and Tam Nakano is about to begin. WWE’s Bayley and Trinity Fatu (Naomi) are in the crowd to watch. #njwk17

While viewers saw both WWE Superstars, none were focused on by the NJPW camera team. This might be a condition by WWE given to the NJPW management. According to Mike Johnson of PWInsider.com, Bayley was in Japan to support her friend and Boss ‘n Hug Connection tag-team partner. She was not expected to be on camera for the NJPW’s biggest show of the year.

Why was Sasha Banks released from WWE?

Sasha Banks and Naomi walked out of Raw on May 16th. WWE issued a statement that night dubbing the women unethical, and Corey Graves stated on the broadcast that they had “summarily and unprofessionally walked out.”


According to Mike Johnson of PWInsider (via Wrestling Inc), “Banks and Naomi were removed from WWE’s internal roster.” Many top WWE stars believed that Banks was already released by the promotion, despite the fact that “talent relations did not send out an internal email telling talent of the releases.”

Wrestling Inc.’s Raj Giri revealed on June 16, 2022, that ‘The Boss’ was already released from her WWE contract, which was one of the most shocking releases in the company’s history. It was, however, believed that nothing was made official because Banks’ lawyers were working for her release.

Banks, a five-time WWE Raw Women’s Champion and a one-time WWE SmackDown Women’s Champion, was the face of the women’s division’s rebirth during the last decade, while also being the main event of WrestleMania in 2021 alongside Bianca Belair. She rose to prominence in WWE NXT, where she had a notable feud with Bayley, with whom she eventually shared the WWE Women’s Tag Team Championship twice.