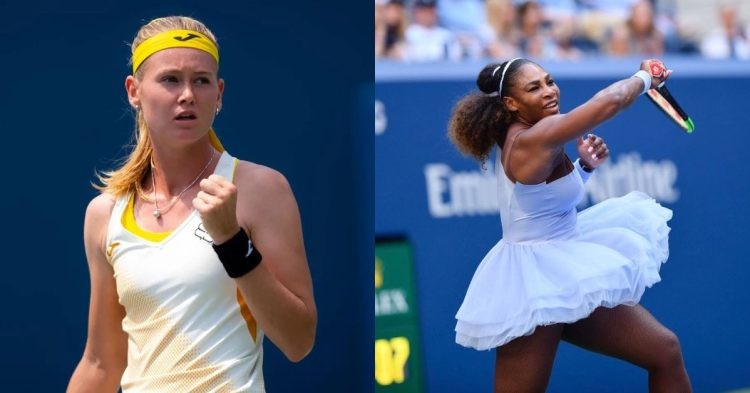 Serena Williams will play her first professional match in almost one year when she returns to the court for the Eastbourne’s doubles event. The American tennis legend will pair with world number three Ons Jabeur for the tournament. Serena will then play the singles event in Wimbledon.

The duo will face Marie Bouzkova and her partner Sara Sorribes Tormo in the first round. Bouzkova is aware that their match is making headlines everyday because of Serena. In a recent interview, she shared her thoughts on the match and Serena’s return to the court.

“I think there’s a lot of attention on her here. She obviously hasn’t been on tour in quite some time, so it’s nice to see her back and practicing next to us.”@MarieBouzkova on facing @serenawilliams in doubles at the #RothesayInternational:https://t.co/9QzUowgCkS

Like most of the players, Bouzkova is also happy that Serena is back. For many tennis players, the junior Williams has been a role model. The Czech player is no exception. Moreover, she said, “She obviously hasn’t been on tour in quite some time, so it’s nice to see her back and practicing next to us. She’s a role model for so many players.”

Bouzkova has played Serena once in 2019 in the semifinal of Canadian Masters. The Czech tennis star won the first set 6-1. However, it was a Serena show after that. The 23-time grand slam winner bounced back and won the next two sets 6-3, 6-3 to advance into the final.

Three years have passed since Bouzkova lost to Serena. She is now hoping to settle the score with the American legend in the doubles event. Bouzkova and Sara clearly have an edge over Serena and Jabeur as the latter are yet to train and practice together.

On the other hand, Bouzkova and Sara have played multiple times in the past and understand each other’s game. It wouldn’t be a surprise if the duo manages to beat Serena and Jabeur without much difficulty. In a joking manner, the 23-year-old said in the interview, “We will try to get some revenge.”

Bouzkova further said, “Sara and I were getting pumped up for the opportunity but then we had to remind ourselves not to get too carried away for the moment.” Bouzkova and Sara are excited at the opportunity of facing Serena and will try their best to make the most out of it.