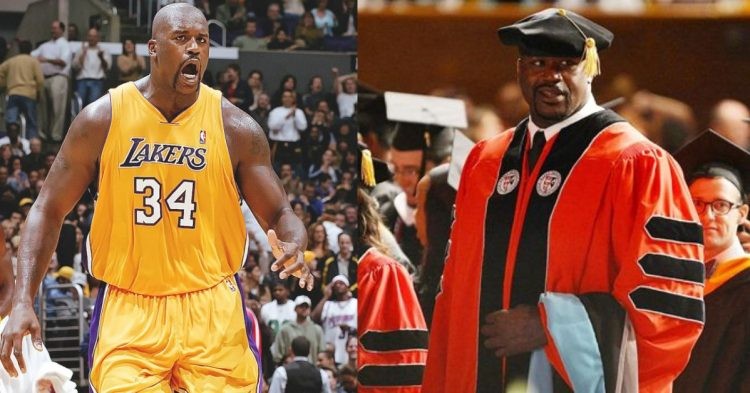 We all know NBA legend Shaquille O’Neal for his accomplishments on the basketball court. He is widely considered the most dominant and imposing player the game has ever seen. Shaq is now no longer a player and has moved on from that part of his life. It would interest many people to know that O’Neal secured a Doctorate.

This is quite remarkable. Very few people are capable of branching out and trying different things in life. Especially if they have already seen success in something they are familiar with. O’Neal has never let his being a basketball player diminish the value of real-world achievements. He has claimed that even his own children are allowed to mess with him only after securing two degrees.

Shaq clearly loves basketball. Be that as it may, he knows there is a lot more to success and in life outside it. When did Shaq get this doctorate and from where? “Is Shaquille O’Neal now a doctor?”. Let’s take a look.

Does Shaquille O’Neal have a Ph.D.?

The world is a very large place and people adhere to different educational systems and formats. The Ph.D. and Doctoral degrees are considered the most advanced forms of academic qualification. There have been several arguments on which is considered greater. However, there is no right answer, and anyone who has completed it is an Academic Doctor.

Shaq managed to do just that. He received his doctoral degree in organizational learning and leadership, with a specialization in human resource development. He graduated from the Miami-based Barry University.

The Diesel didn’t just jump his way to the top in the academic world. He went back to college and completed his bachelor’s degree in General Studies from Louisiana state university. Moreover, he also did his Master of Business Administration from the University of Phoenix. O’Neal revealed how this latest accomplishment means a lot to him.

Reminder that Shaq has a doctorate degree in education. https://t.co/cT3IzhiRC6 pic.twitter.com/JKfThDELEs

“Everyone thinks this is honorary. But this is not honorary. I put in four and a half hard years staying up late at night studying, reading rewriting papers Dr. Koop marked up. The work was very rigorous but very enjoyable. And I’m not done. I think I’m going to try law school next. I’m thinking about it. We’ll see.”

Thus, Shaq concluded on a humourous note. However, it is quite unfair to assume he cannot get a law degree. After all, nobody expected him to receive a doctorate in the first place.