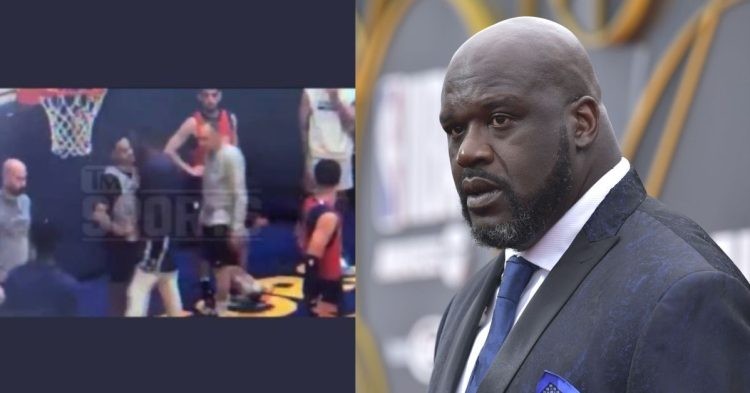 The Draymond Green and Jordan Poole altercation has been in the headlines for a while now. To be honest, it’s not every day that you see two of the best players for a top NBA team break into a fight. For context, Draymond punched young Jordan in the face after what seemed to be a verbal fight.

However, a video footage of the fight was also leaked by unknown sources. TMZ then released it for the world to see. Many have had a go at Green for punching his own teammate, and others have claimed that Poole was getting too arrogant. With that said, many current, and former players, and even fans also have had their say on the reason why DG punched Jordan. One such legend would be the one and only Shaquille O’Neal.

On the Big Podcast with Shaq, the former LA Lakers star spoke about the fight. Initially, he supported DG against haters and said, “First of all, all you people messing with Draymond, mind your da*n business. I know the game, is a nice game, all this and that. But you guys don’t know anything about competitive sport, you have no idea what you’re talking about. So just shut the hell up and be a fan.”

As Shaq said, the NBA is a whole different game that what we see on the outside. The competitive spirit the players have inside them is not what we’re used to seeing. Although it may bring the bad side out of athletes at times, it is what makes the game so appealing to watch, where every player is hungry for a win. In this case, that happened to Draymond Green.

O’Neal also spoke about what could have prompted the fight. Speaking about Jordan Poole, he said, “He about to get that contract extension, he saw what Tyler Herro got, ‘yo Tyler Herro got 150, I’m getting 145 or 148. He prolly talking a little to Draymond and Draymond had to check him. This happens, this happens in AAU, this happens in the football league. This is what we do.”

The former NBA champion mentions that Poole might have been over the edge before the fight broke out. He claims that his contract situation, which many expect to be more than $100 million was a factor. Moreover, seeing Miami Heat’s Tyler Herro bag a $130 million contract might have prompted Poole to think the same as well.

In addition to that, Shaq also mentioned that it was common for fights to break out. He also claimed that he did the same plenty of times as well. O’Neal mentioned, “Imma go on record, I touched a lot of people up”. As he said, O’Neal has been involved in many fights in the NBA. The most famous one would be his tussle with Charles Barkley in 1999.

Shaq concluded and claimed, “It builds character. Its gonna bring them closer together. It keeps the pecking order status where it should be.” Many may disagree with the man’s opinion when he says it will bring them closer. But if there was one person who knows how it feels to be in their shoes, it would be Shaq himself. We can only wait and watch if Draymond Green and Jordan Poole can move on from the incident.