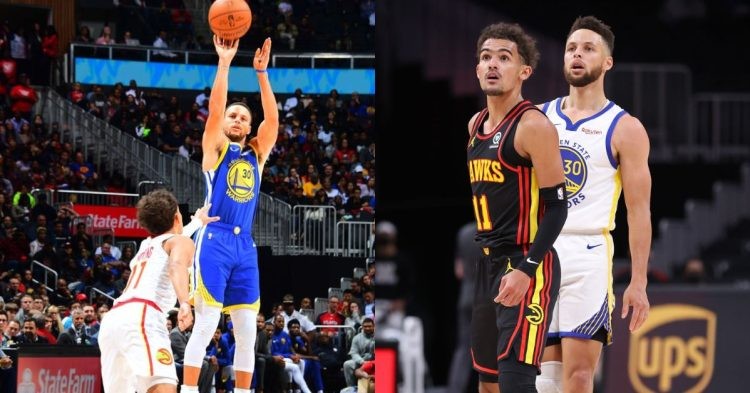 Stephen Curry is currently the best shooter in the game, and arguably the best one of all time. He holds the record for the most 3-pointers made in the history of the NBA. Curry took the top spot from Ray Allen in December 2021. Apart from 3-pointers, we all know Steph can make even the hardest shots look so effortless.

The Golden State Warriors star has been a role model for many young players. One of them would be Atlanta Hawks superstar Trae Young. He has publicly revealed numerous times about Steph is a role model for him. However, let’s look back on the time when he said he could surpass his idol’s status.

On The Big Podcast with Shaq in 2020, the former LA Lakers star asked Trae how long would it take for him to become a better shooter than Curry to be the best one in the league. Although it was tough, Shaquille O’Neal did manage to get an answer out of Young. Trae mentioned that he would be able to do it in a year.

Can Trae Young become a better shooter than Stephen Curry?

In addition to that, Shaq asked Trae the question knowing it would be possible for the young player to make it happen. As an experienced player with 4 NBA championships, Shaq knows what it will take for someone to take the reins. And it seems like he saw that in Trae. The fact that he brought the question into the conversation should speak at length about the confidence he had in Trae’s ability.

It caught the attention of many as fans believed Trae still had a long way to go. A while later, on the All The Smoke podcast, Matt Barnes asked about the comment he made on Shaq’s podcast.

Trae said, “I gave a lot of respect to Steph, I have a lot of respect for Steph, he’s done, I mean, so much…MVPs. I think if it wasn’t for Steph, there wouldn’t be a Trae Young. Steph is the first to do, I mean do what he’s doing. I got a lot of love for Steph and everything he’s done but for me, I’m very confident, Shaq was trying to get that out of me. He knows how confident I am of myself and my work and what I put in so that’s what it is.”

According to statmuse, Trae has an FG percentage of 43.7% in his regular-season and playoff career. To put that into context, Steph’s is 47%. To be fair to Trae, he hasn’t played as many games as Steph yet. And we should also consider the fact that he still has many years left in the NBA.

26.3 PPG, 9.4 APG… Trae Young’s full offensive arsenal has been on display as a scorer and playmaker!

Check out his best plays of the season… the @ATLHawks host the Nets Friday night at 7:30pm/et on ESPN. pic.twitter.com/uz8K90J1z5

It would not be fair on Young to determine whether he will become the greatest shooter ever like Steph since that will be too much pressure. However, if he continues to put up ridiculous performances like his role model, he may well end up in the same shoes.