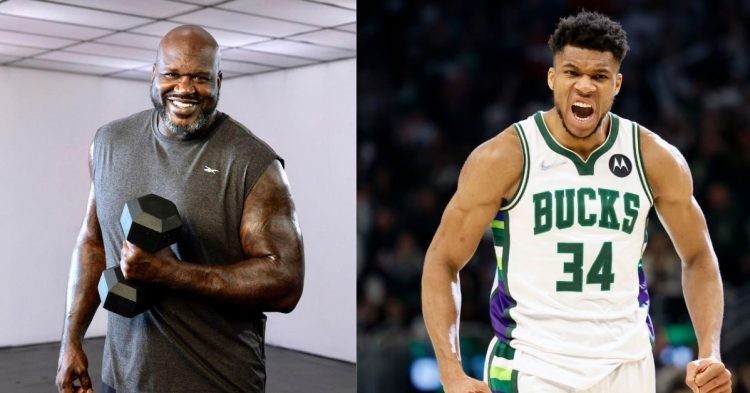 Several basketball analysts and old heads criticize the modern era of the NBA and compare it to the past. Shaquille O’Neal is a legendary NBA center with a force and power that few could imagine. In his prime, there was simply no man who could guard the 4x NBA champion. O’Neal gave props to Milwaukee Bucks superstar Giannis Antetokounmpo after his display of dominance in the 2021 NBA finals.

We live in the present as sports fans and soon forget what we just saw a year ago. Shaq clearly has not and remembers the destruction the Greek Freak single-handedly caused to the Phoenix Suns. Compliments, especially genuine ones are quite rare. It is important to understand the context and what exactly O’Neal said.

Shaq was initially discussing his conflicts with the NBA officials and referees back in his time. Then, he went on to recall that someone had once told him he couldn’t play in today’s era. O’Neal disputed this with an interesting claim that he is still playing in the league.

“Now 15, 20 years later we have guys shooting 3s. it’s cute, it’s not something I would do… Somebody asked me the other day that Shaq couldn’t play today. But you’re not paying attention, I am playing today my name is Greek Freak. Who is the first big guy to take it coast to coast?”

The Lakers legend went on to bring the point home about his similarities to Giannis, “I play just like Greek Freak take it off the glass, high % shots, high % shots. I shoot a 3 every now and then so I would actually love to play in this game. It’s less physical. I would bring a little bit more physicality. I would bring my length I would bring my athleticism and I’d be Greek Freak. So before you say Shaq can’t play in this era today, I’m already playing. My name is Giannis Antakanumbo. However, you pronounce it”.

Shaquille O’Neal is both right and wrong. At the moment, there is no player in the NBA more similar to him than Giannis. However, Giannis has speed and handles that surpass Shaq due to his lean frame. Thus, he is able to squeeze past opponents and dunk on them with Shaq-like strength.