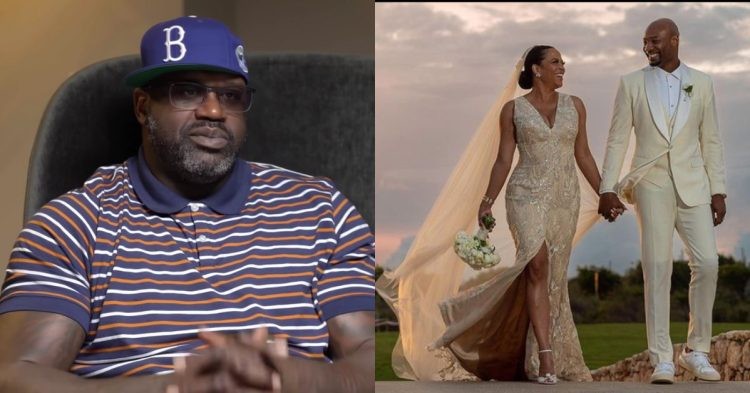 Los Angeles Lakers legend Shaquille O’Neal had quite an illustrious NBA career. Additionally, he is also a family man and a father. We are already familiar with his eldest son Shareef, who played for the Lakers this NBA offseason during the summer league. Not many people know that Shaq’s ex-wife Shaunie recently remarried to a man named Pastor Keion Henderson.

This occurred several years after her initial marriage with Shaq failed. This signifies a fresh start in Shaunie’s life and we are glad she found somebody she wants to spend the rest of it with. Shaq recently shared what went wrong in his previous marriage and how he feels now that she got remarried to another man.

Statistics indicate that more than 50% of marriages end in divorce. People are quick to get married in the heat of the moment. However, not everyone has what it takes to ride an ugly storm in a long-term relationship and stay consistent and committed. Marriage vows are easy to say at the altar but very hard to follow through with until death separates the couple.

Shaq revealed in a discrete manner, that his inability to stay faithful and true to his vows was a huge reason for his marriage with Shaunie going down the drain. He was asked whether he could have controlled the outcome and prevented the divorce. To that, the 4x NBA champion delivered an eye-opening response.

“No, I couldn’t. I was bad. Yeah but no, I never talked about this, and I’m glad you guys are asking because I don’t mind talking about that but I was bad. She was awesome, she really was. It was all me, look we don’t need to talk about what I was doing. But I wasn’t protecting her and I wasn’t protecting those vows. So you know sometimes when you live that double life you get caught up in it. So I’m not going to say it was her, it was all me.”

We shouldn’t be too quick to judge Shaq for slipping up and being unfaithful. After all, one can only wonder what that amount of power, money, and influence can do to a man. He admitted he was wrong and did not attempt to flip the script against her to win the people’s approval.

O’Neal also released a statement when he found out his ex-wife was about to get married to Mr. Henderson. However, this was not a malicious or negative comment as we are sure Shaq wants Shaunie to be happy.

“She’s about to marry a fine, young gentleman, and I’m happy for her, and we have a great relationship.”

Shaq’s children also supported their mother’s decision to remarry. Moreover, they even walked her down the aisle as her father had passed away. We hope O’Neal understands his flaws and mistakes during his previous marriage for the sake of his future relationships.
Tags: NBAShaquille O'Neal
Previous Post