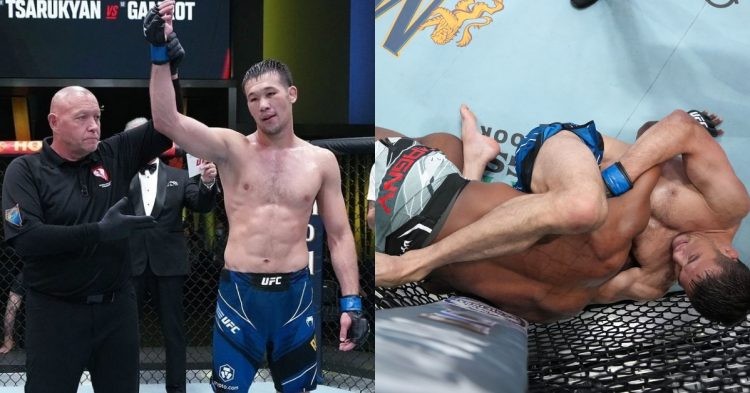 Neil Magny returned to action as he clashed against rising welterweight Shavkat Rakhmonov in a three-round bout in the co-main event of UFC Fight Night: Tsarukyan vs Gamry. Going into this bout, there were a lot of eyes on Shavkat as he stepped inside the octagon with an undefeated MMA record of 15-0.

Consequently, this was expected to be the toughest challenge for Rakhmonov who was undefeated in the UFC with three wins to his name as Magny was #10 in the division. However, the Kazakh welterweight faced no troubles as he extended his record to 16-0 with a submission win in the second round.

Nomad dominated Magny from start to finish and didn’t give him any chance to get an upper hand in the fight. Rakhmonov capitalised on an early mistake of Magny as he grabbed his leg and landed a takedown early in the first round. Thereafter he controlled Neil on the ground for the entirety of the first round.

He landed some nasty shots on the top position and constantly threatened to lock in a submission manoeuvre. Rakhmonov carried the momentum going into the second round as he held Magny in the clinch as soon as the second round began and skillfully took him down.

It was just one-way traffic after this takedown as Magny was unable to land anything significant from the bottom position. In the dying seconds of the second round, Shavkat got into a good position and locked in the guillotine choke and submitted Neil Magny.

Following his dominant display against veteran Neil Magny at UFC Fight Night: Tsarukyan vs Gamrot, former UFC champion Michael Bisping asked Shavkat Rakhmonov some questions regarding his submission win and who he wants to face next in the post-fight interview.

Initially, Nomad vowed to become the UFC champion in the next two years and before leaving the octagon the Kazakh welterweight expressed his desire to face Stephen Thompson next.

Despite the interest shown by Rakhmonov, it is highly unlikely that Wonderboy would accept this bout because he wanted to face a striker in his next matchup.