Shavkat Rakhmonov UFC Fight Purse: How Much Money Has “Nomad” Earned in His UFC Career? 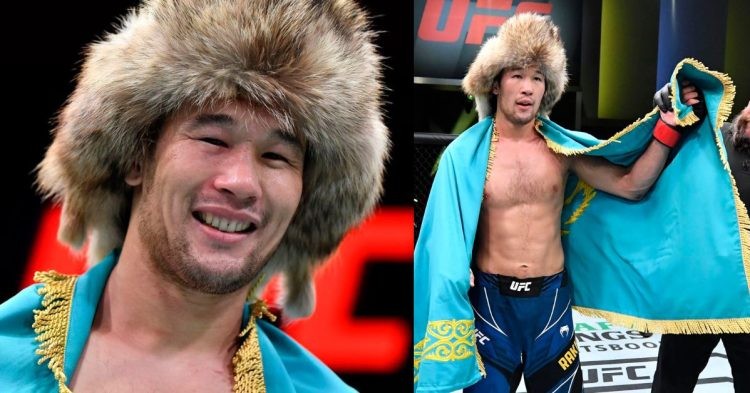 In just three fights since his UFC debut, Shavkat Rakhmonov has earned quite a name for himself. The Welterweight hasn’t even gone past the 2nd round in any of his three fights as his victory came before the end of the second round. Expectations for his upcoming fight are high.

Rakhmonov started his MMA career in 2014 by competing in the M-1 challenge 52. He won the fight with a triangle submission in the first round. Prior to this, Shavkat also won the WMMAA World and Asian Championships titles as an amateur. He would go on to fight seven fights for the M-1 promotion and five fights for the KZMMAF(Kazakhstan Mixed Martial Arts Federation), winning all of them.

“Nomad” won his first title, the KZMMAF welterweight belt, against Faridun Odilov by a third round TKO. He won his second title, the M-1 Welterweight challenge, in 2018 and defended his title as well.

Rakhmonov was signed by UFC in 2020 and became the first Kazakh to do so. He was set up to fight Bartosz Fabinski in March 2020 and Ramazan Emeev in July 2020 of which both fights were cancelled. His UFC debut was against Alex Oliveira at UFC 254. Rakhmonov won the tussle via a first round submission.

He won the second fight and third fight. Rakhmonov’s star-studded performance in his third fight earned him the Performance of the Night award.

Rakhmonov will be fighting fight Neil Magny on the 26th of June at the UFC Apex facility in Enterprise, Nevada, Las Vegas.

The 3-0 fighter will be an exciting prodigy to watch. Rakhmonov will want to be victorious for this match to keep his record of no defeats in his professional career.

Tons to like on this weekend’s UFC card but for me, it’s the return of Shavkat Rakhmonov. A win over Neil Magny and then we’re really off to the races with this guy. He’s 15-0, finished all of his opponents and those have been split equally between KO/TKOs and Subs. #UFCVegas57 pic.twitter.com/odtoaCe62l

Rakhmonov made his UFC debut against Alex Oliveira in 2020. A good show was put on by him. He won the fight by first round submission. Rakhmonov earned a total of $39,100 dollars of which $15,600 came from Oliveira’s fight purse for missing weights.

“Nomad” won the fight via rear naked choke submission in the second round. He earned a total of $28,000 which includes his $12,000 win bonus.

So far, Rakhmonov has earned an approximate $133,600 in his UFC career.

Khabib’s Prodigy Umar Nurmagomedov Will Be a Huge Threat to UFC Bantamweight Title, Here’s Why