Shavkat Rakhmonov vs Kamaru Usman: Can the UFC Prospect Be a Huge Threat to the Nigerian Nightmare? 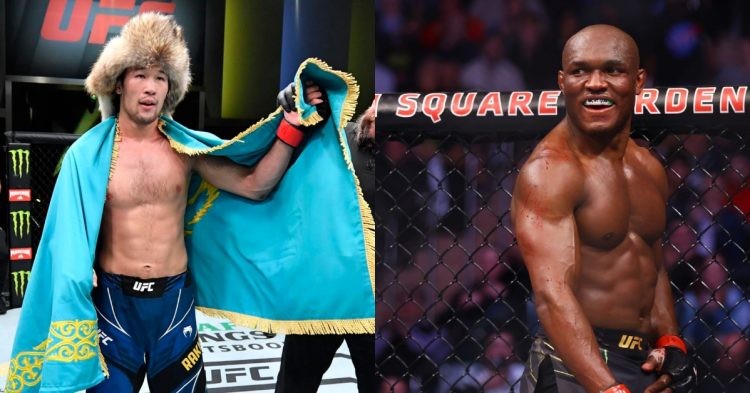 Is Shavkat Rakhmonov a credible threat for Kamaru Usman. (Images via Twitter)

UFC welterweight prospect Shavkat Rakhmonov will be in action this weekend. Currently ranked 15th, Rakhmonov will take on Neil Magny in the co-main event of UFC Fight Night: Tsarukyan vs Gamrot. A win over Magny will help Shavkat to break into the Top 10 of the division.

The Kazakh fighter made his debut on October 17th, 2014. Shavkat made a statement on his arrival to the sport as he submitted Adam Tsurov at M-1 Challenge 52. From 2014 to 2019, he went through 12 opponents and he finished all of them. The 27-year-old came into the UFC 2020 and beat Alex Oliveira at UFC 254. He finished Oliveira with a guillotine choke in Round 1.

Rakhmonov followed up his debut win with two dominant finishes against Michel Prazeres and Carlton Harris. So far, Shavkat has 8 wins via knockout. His grappling is nothing to be undermined either as Rakhmonov holds 7 submissions as well. The Nomad has a finishing rate of 100% which is hard to come by in the sport of Mixed Martial Arts (MMA).

If he does get past Magny this weekend, big things are waiting in the wings for him. The bottom part of the Top 10 at welterweight mostly consists of fighters who are past their prime. Someone like Stephen Thompson will be the ideal next opponent for Rakhmonov if everything falls into place.

Even if he does go past every other ranked contender in the division, Shavkat will face the biggest challenge of his life against the champ. Kamaru Usman currently holds the no. 1 ranking in the list of P4P (pound for pound) fighters. Can the rising contender get through Usman if they meet down the line? Let’s find out.

Does Shavkat Rakhmonov have what it takes to beat Kamaru Usman?

Although both Kamaru Usman and Shavkat Rakhmonov have formidable striking skills, both got their starts with wrestling. Hence, the outcome of the fight will depend on who is more dominant in the grappling portion of the contest.

Prior to joining Trevor Wittman, Kamaru had the reputation of a fighter who does everything to take his opponent down and out grapple them to win the bout. But his finishing rate on the ground is surprisingly minimal. Out of his 20 wins so far, the Nigerian Nightmare has only submitted one opponent in his career so far.

With an accuracy of 49%, Usman averages 3 takedowns per fight. But as evidenced by the stats mentioned above, Kamaru uses his wrestling mostly to keep control of the fight. Usman does not chase a finish on the ground aggressively. But he does boast a takedown defence rate of 100%.

Similarly to Usman, nobody has been able to take Shavkat down to the mat either. However, that may change as his career in the UFC plays out a bit more. In his UFC 3 bouts, Rakhmonov averages 1.88 takedowns per fight and attempts 1.9 submissions per fight.

If Rakhmonov can maintain his takedown defence rate, it will be fascinating to see who concedes the very first takedown of their career when he and Usman meet inside the Octagon.

In terms of striking, Rakhmonov is much more conservative compared to Usman. While the former lands 2.94 strikes per minute, the latter lands 4.66. In his 15 fights, Kamaru has managed to score 10 knockdowns. Shavkat on the other hand scored his very first knockdown against Carlton Harris which saw him getting the KO win via a spinning hook kick.

Rakhmonov is more agile inside the cage, while Kamaru is much heavier on his feet. The champ relies much more on his jab and looping overhand rights, whereas Shavkat is versatile with his strikes.

At this point in their career, the advantage will be with Usman due to his body of work and experience. However, a year or two down the line, the story may not be the same. Rakhmonov will refine his game much more and become even more lethal if his career is on the right track.