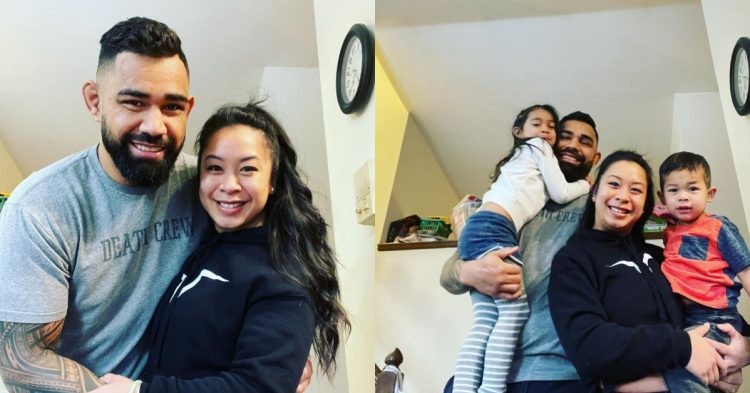 Zac Pauga credits his wife Jess for supporting him. (Images via Instagram)

Zac Pauga will face Mohammed Usman in the finale of The Ultimate Fighter 30 this weekend. This particular season featured former UFC women’s bantamweight champ Julianna Pena and the current title holder Amanda Nunes as coaches. However, both Pauga and Usman were in the same team together.

Despite being teammates for the majority of the season, they now find themselves in the finale, standing across each other in the Octagon. Ahead of the fight, they sat down for interviews where they revealed their respective journeys before having the chance to fight for a UFC contract in the TUF house.

One-half of the heavyweight finalists, Zac Pauga had a tough road to the UFC. In the interview, he revealed that MMA was not his first love. Instead, he wanted to become a professional football player. Despite spending a year with Houston Texans as a running back, he had to give up on the dream. But thankfully he found a new passion to pursue MMA.

As the fans know, making a decent earning as an up-and-coming fighter is not something that is very easy to do. It was especially hard for Zac as he was a married man with 2 children. But it was his wife Jess who backed him all the way as he left his job to become an MMA fighter. He told the story in an interview with the UFC.

“I’m married and have two kids, son and a daughter. My daughter is 5 and my son is 2. My wife’s name is Jess and she’s the best wife because she just accepts who I’m. Try going to tell your wife that you’re gonna quit your job because you wanna go take off your shirt and fight people on an Octagon. See how she reacts.”

“She told me, ‘go do it. But make sure you do it right.’ When I go out there and win this fight, it will be because of the support I had from my family. I quit my job 8 months ago to go chase this dream and my wife has been holding it down ever since then.”

Zac Pauga made his pro-MMA debut in July of 2020. Ahead of that, he had 5 amateur fights and all of those took place in the period of 2019 to 2020. So he does not have the same experience as some of his counterparts. But he has been undefeated throughout his MMA career. He currently has a record of 5-0 heading into the most important fight of his life.

But he definitely has a good team behind him. Zac fights out of Elevation Fight Team which also has Curtis Blaydes. Blaydes is ranked in the Top 5 of the UFC heavyweight division and is considered one of the most elite fighters in the weight class. In the video, Zac could be seen training with Curtis and honing his striking and wrestling skills.

Blaydes was very complimentary of the 34-year-old and stated that Pauga has made significant improvements since joining the gym four years ago. So the future definitely seems bright for Zac. If he does manage to beat Usman in the TUF finale, the heavyweight division will have another well-rounded fighter with great potential.