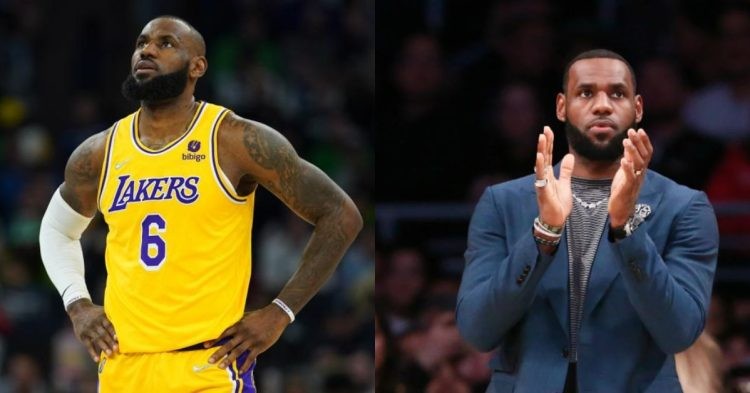 LeBron James is one of the greatest NBA players ever and has spent the last three years of his career with the Los Angeles Lakers. However, the 4x NBA champion has seen the least amount of success with this franchise. He has been in absolute peak condition and showcased a dominant year 19. Yet, his team has let him down and they failed to make the playoffs this year.

We know how particular King James is about remaining in contention for an NBA title. That is why he has switched teams thrice in his career. He is now eligible for a contract extension with the Lakers. Malika Andrews, Jaylen Rose, Bobby Marks, and Matt Barnes weighed in on the situation. It is important to know the dynamics that go into the making of contracts of this nature.

Not many people know how NBA contracts work. A player who signs a deal for a fixed amount of years plays out his contract and becomes a free agent. He is then eventually given a new contract. . However, there have also been cases of players forcing their way out of unfavorable situations by demanding trades midway through their contracts.

Will LeBron James sign a contract extension with the Lakers?@SIChrisMannix writes there’s little upside to signing a deal this early https://t.co/DjzqqgFcrE

Contract extensions are offered to players by the franchise. King James is eligible to sign an extension worth $97 million for an additional 2 seasons as a Laker. He is worth a billion dollars and is under no pressure to sign this deal. Bobby Marks, a member of the NBA front office weighed in on the situation.

“I think for him, I know certainly taking the guaranteed money route is probably the safe bet if he did that would take him up to $530 million in his career on the court, the most ever of any player here. I think for him certainly playing it out and seeing where this roster looks like, not lock into that contract. Once you lock in it takes a little bit of pressure off the front office. So I understand it from both sides. Certainly a $100 is nothing to turn down but leave your options open as far as playing out this year”.

Marks also went on to make another valid point, “ You know this, there will be drama hovering over this organization if he becomes a potential free agent next year.” One can only wonder if claiming to have earnt a total of $530 million from the NBA is incentive enough for the contract extension in August 2022. If he does not sign, the drama will indeed begin.