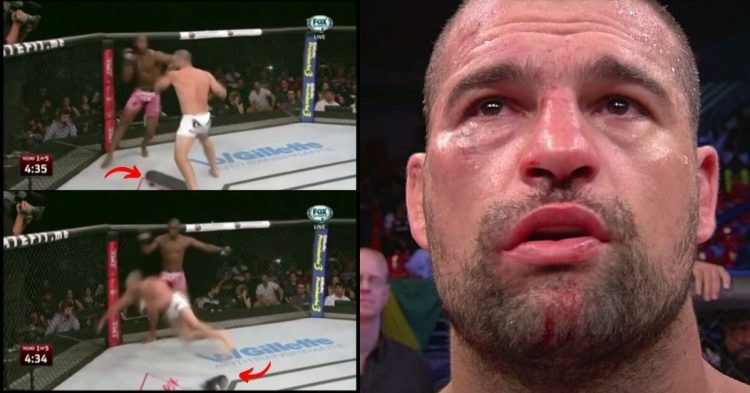 All these years after, a video is doing rounds on the internet where Shogun Rua can be seen slipping off a skateboard allegedly thrown by a fan. What’s more interesting? Fans seem to believe it happened. Why? Well, the editing is just so damn good that it’s hard not to get fooled!

Check out Skateboard inside the UFC Octagon video that is fooling the internet.

8 years ago today, someone threw a skateboard in the octagon during the main eventpic.twitter.com/H1znim5Pot

The skateboard inside the Octagon during Shogun Rua vs Ovince Saint Preux is not real but an edited video from a fan. The video is so good that it has managed to make many believe that the incident really occurred.

The real fight went similarly to the edited video, albeit Rua did not slip off a skateboard, but dropped on the ground after eating a vicious left hook from OSP. Check out some hilarious fan reactions to the edited clip.

Did a fan really throw a skateboard inside the UFC Octagon during Shogun vs Saint Preux?

The skateboard inside the UFC Octagon is just a crafty work of a fan. However, over the years, fans have continued to use the same video on November 9, 2022, and it never fails to fool the internet.

It was one of the security guys who snatched the skateboard from one of the audience & threw it in the air outta frustration. Sadly it landed in the ring, both were fined 5000$.

The amount of people that think this actually happened 😭😭

no way this is real

Funny but not funny did the guy lose because of it?

how did someone even sneak a skateboard into the arena

Even in 2022, the video continues to baffle UFC fans. And if that’s not enough, those who are aware leave no stone unturned in keeping the mystery behind it alive. UFC Fight Night 56 was a spectacular card and featured the likes of Warlley Alves, Leon Edwards, Dhiego Lima, and Colby Covington among others.

Leon Edwards made his UFC debut on the card, while Colby Covington competed in just his second UFC fight.