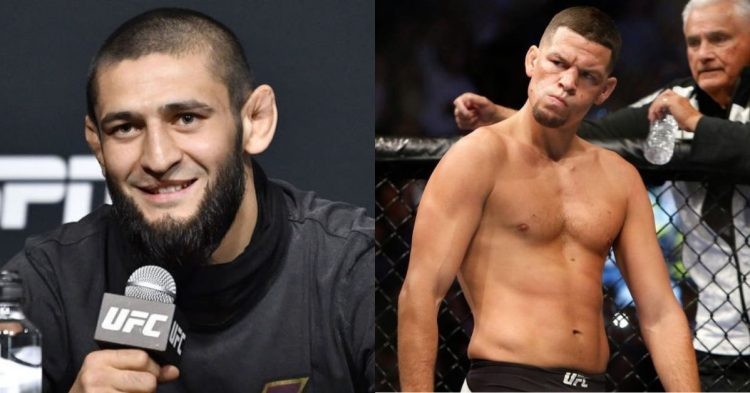 Khamzat Chimaev will be back in action this weekend on September 10th as he takes on Nate Diaz in a five-round UFC 279 main event fight that will take place at the T-Mobile Arena in Las Vegas. It is needless to say, fight fans around the world are excited for this matchup as two of the most aggressive fighters will collide against each other inside the octagon.

However, as soon as the fight was announced, numerous fans were siding with The Borz and they predicted that Chimaev will destroy Nate Diaz. Considering Khamzat’s terrific run and his impressive win over Gilbert Burns in his last fight, everyone was expecting him to face someone like Colby Covington next.

However, UFC scheduling him to fight The Stockton Slugger in what would most likely be Diaz’s last fight has taken everyone by surprise. As we build up to this fight, Khamzat Chimaev sat down for an interview with ESPN’s Brett Okamoto and he asked the welterweight behind his motivation to fight Diaz who is unranked in the division.

Chimaev revealed that he is receiving the biggest fight purse of his career and is getting paid millions to fight Nate Diaz. Thereafter he also went on to explain why money is the motivating factor for him to compete in the UFC.

“They make me happy but I don’t say. Smash somebody get them millions brother. Everyone loves the money. You know like we need the money because you need that for family, for somebody, for doing things like for good life.”

While speaking to Brett Okamoto in an interview, Khamzat Chimaev was questioned about his thoughts on what would happen after he beats Nate Diaz at UFC 279. The Borz kept it simple and said that he will go out there and have fun inside the octagon and get good money.

Chimaev also added that the UFC has paid him handsomely and wants him to take The Stockton Slugger’s head. As usual, Khamzat is extremely confident about getting the job done against Nate at UFC 279 and so far, The Borz has delivered on the expectations.

Hence it is needless to say that Khamzat is an overwhelming favourite in this contest. But it would be bizarre to completely rule out a world-class fighter like Nate Diaz. In the end, this fight has violence written all over it and it would be exciting to see how this fight plays out.

Do let us know in the comments section who you think will emerge victorious in this main event fight between Chimaev and Nate.