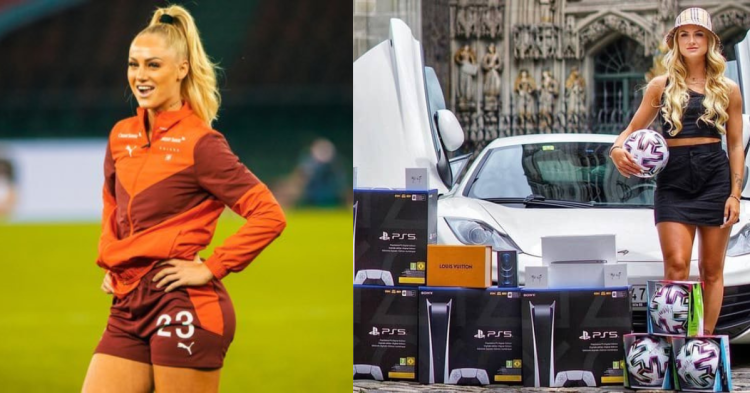 Alisha Lehmann is a Swiss professional footballer who plays as a forward for Aston Villa Women’s team and the Switzerland National Women’s team. The 23-year-old joined the WSL team in 2021 and has since become a very important player in their attack.

She made her debut for Switzerland in October 2017, scoring her first goal for the national team in March 2018 against Finland.

As per recent reports, Lehmann’s net worth is between $600,000 to $1.5 million. This comes from her partnerships with Adidas and EA Sports. She has also been photographed advertising for PlayStation.

As per reports, her salary comes from appearances and bonuses from her club and country. She also has certain bonuses for goals scored. Her reported annual salary at Aston Villa is upwards of $200,000.

She has 8.7 million followers on her Instagram account and 122,000 followers on Twitter. This makes her one of the most followed female footballers on the planet. She is in a relationship with Douglas Luiz, a Brazilian midfielder also playing for Aston Villa Men’s team.

Club and International career so far

She joined BSC YB Frauen, a Swiss club and the women’s team representing BSC Young Boys. Scoring 25 goals in 52 appearances for them, she earned a well-deserved move to the WSL, where she signed for West Ham. She helped the team to a Women’s FA Cup final, scoring 9 goals in 42 appearances.

After a brief loan at Everton, where she scored 1 goal in 8 appearances, she signed for Aston Villa in 2021. She has since gone on to score 3 goals in 23 appearances for them.

The Women’s Super League started off with a classic. Aston Villa prevailed over giants Manchester City in a 4-3 win. Alisha Lehmann scored the first goal of the match in the 22nd minute and copied Cristiano Ronaldo’s celebration.

The celebration aslo got the Aston Villa forward some unwanted attention and was defended by her partner, Douglas Luiz. The Brazilian, in a social media post, said, “You are old, (with) years in football, and post a video that doesn’t respect women’s football nor the player who, in this case, is my girlfriend.”