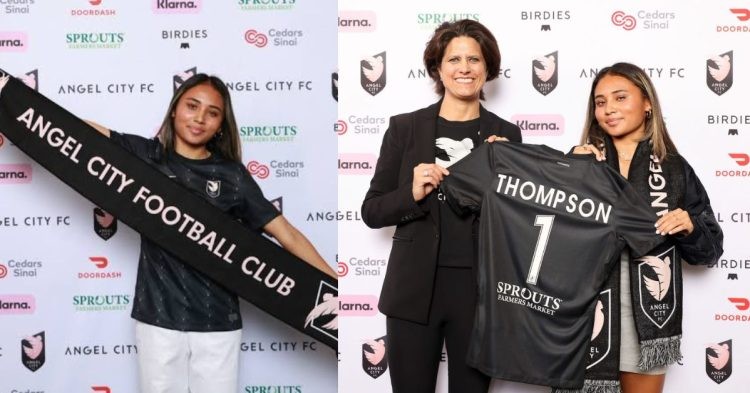 NWSL is growing rapidly in its popularity in the past year or so. Exciting young talents are being discovered in the competition bringing more attention. Alyssa Thompson is the name on the NWSL fans’ lips and very deservingly as well.

Alyssa Thompson was a student at Harvard-Westlake high school and she is from Los Angles. The 18-year-old speed sensation is an all-rounder forward. She announced her eligibility to play in the NWSL last week and made history as well. She became a senior US international at the age of 17.

Alyssa became the first high-schooler ever to become the Number one draft pick in the NWSL drafts. Her name can be new to quite a few people, but she has been considered a top prospect for some years now. The crown of the number 1 pick brought her straight into the limelight.

Receive the Gatorade Player of the Year Award✅
Debut for the USWNT at 17 ✅
Become the youngest #1 Draft pick in NWSL history ✅
Get drafted by your hometown team, Angel City FC ✅
Sit courtside for the @Lakers ✅
What’s next for Alyssa Thompson? pic.twitter.com/Cptu7HazgQ

Alyssa was elated with the news. She said “It’s a crazy feeling,” after she was picked. She watched the draft from her home and said, “And I’m so happy that I get to be surrounded by my friends and family. I’m just really excited. My heart’s beating really fast,” about how she couldn’t believe what just happened.

What is Alyssa Thomspon’s speed?

Alyssa Thomspson’s biggest strength is her lightning speed. She is a very agile player as well. Alyssa’s pace and gliding movement on the soccer ball make her unstoppable. Her new team Angel City FC has described Alyssa as a “generational talent.” She has already made her senior International debut for USWNT last year against the Euro Cup champions, England.

The 18-year-old forward recorded an insane run for her school Harvard-Westlake. She ran 100 meters in just 11.74 seconds, which is only more than 2 seconds for the record-holder, Usain Bolt. Her school coach Jonas Koolsbergen was aware of Alyssa’s abilities and said, “It was a spectacular, great execution in bringing out her tremendous abilities and talent,” about Alyssa’s unreal 100-meter sprint.

Alyssa is only 18 and she is still in her high-school days. According to the reports provided by ESPN says that her parents and Alyssa are willing to continue studying to create a strong educational background. In her interview with ESPN, she said, “From the beginning, it’s always been something that if I’m going to go pro, I’m still going to get an education,” about her balancing both fields equally.

Angel City FC has reportedly promised to help with her education in the upcoming years as well. Alyssa will be playing in front of 20,000 Angel City FC fans this entire season and might also make the USWNT for the upcoming World Cup in July. In a word, Alyssa’s future is looking very bright.