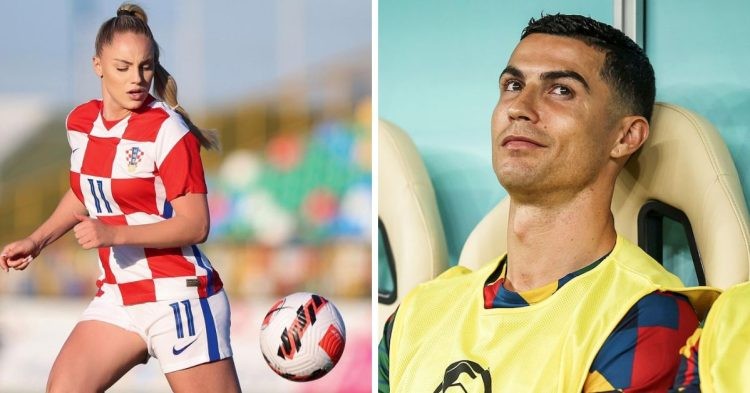 Ana Maria Markovic, the most beautiful soccer player, recently took to Twitter to share one of her stunning images. The image got a lot of love from her followers, with one fan jokingly tweeting that “Cristiano Ronaldo might become a polygamist I’d understand”, which Ana Maria Markovic responded to with a laughing emoji.

It’s no surprise that Ana Maria Markovic is a massive fan of the Portuguese soccer star, with many of her fans referring to him as the real GOAT (Greatest Of All Time), not Lionel Messi. Her response to the fan’s post showed her admiration for Cristiano Ronaldo and she also showed her sense of humor.

Who is Ana Maria Markovic?

Ana Maria Marković is a talented Croatian soccer player who competes as an attacker for the Swiss Women’s Super League squad Grasshopper and Croatia’s national team. Ana Maria Marković was born on the 9th of November 1999 in Split, Croatia. Now in 2022, she is 23 years old and her star sign is Scorpio.

She is referred to as the globe’s most attractive soccer player. Marković is from a Croatian family line from her mom’s side, which originates from Split. She was born in Split and moved with her family to Switzerland when she was 12 and was raised in Zürich. When Marković was 14 years old, she began playing soccer in Switzerland; she mentioned that she was inspired to start playing due to the growth of women’s soccer.

The Croatian Football Federation took notice of Marković while she was playing for Grasshopper in Switzerland and invited her to join the Croatia national team. Marković has cited Cristiano Ronaldo and Luka Modric as her favorite soccer players.

Cristiano Ronaldo doesn‘t require any introduction. The renowned ex–Manchester United player, who is not only the greatest striker on the pitch but also an adoring partner, often takes the chance to show the world through his social media posts or snippets of his life with his partner Georgina Rodriguez.

During an interview with British journalist and TV host Piers Morgan, the Portuguese soccer star stated that his most precious goal was nothing compared to his time with his gorgeous Spanish partner Georgina.

When Morgan posed the question of whether Ronaldo preferred the best goal of his career or having s*x with Georgina, Ronaldo immediately replied that he would choose s*x with Georgina without a moment‘s hesitation. Georgina first encountered Ronaldo in 2016 while he was playing for Real Madrid and she was a sales assistant. She has since mentioned in an interview that there was an instant attraction when they first met.

“Make Sure I Didn’t Have Any Kind of Disease” – Scared of Brittney Griner’s Height in High School, Griner’s Father Took Necessary Steps for His Daughter