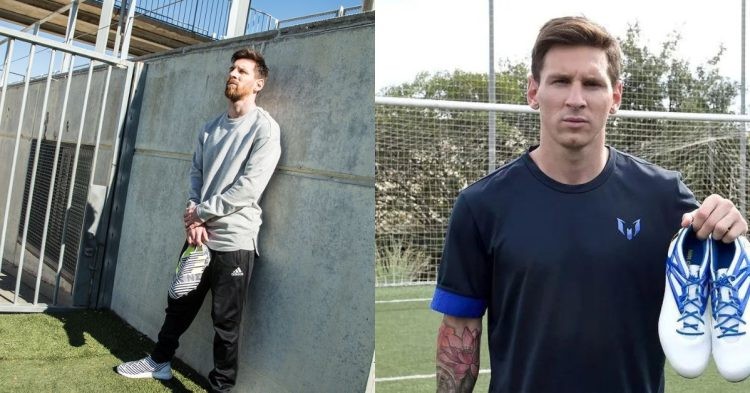 Lionel Messi has a lucrative lifetime contract with Adidas as well(Credits: GOAL and Soccer Cleats 101)

Adidas is one of the biggest sports brands in the world. It sponsors some of the biggest stars, both inside and outside the sports industry. Mohamed Salah, Paul Pogba, Gareth Bale, and Lionel Messi are some of the stars of football who have had huge deals with Adidas. Even American rapper Kanye West had a lucrative deal with Adidas until very recently.

Leo Messi: “Happy to continue working with adidas for many more years!” pic.twitter.com/fMD6D2PLUs

Besides Kanye West, Adidas has now also helped Messi cross the $1 billion earnings mark. Besides his huge Adidas contract, Messi has many other sponsorship deals as well. He is also on a massive contract at PSG.

Lionel Messi and his Adidas contract

Messi has been seen wearing Adidas boots throughout his career. Even before getting a lucrative deal from Adidas, Messi was seen wearing their boots. In 2017, Messi signed a lifetime contract with Adidas, which is worth a reported $1 billion.

He became the first footballer to release a sub-brand of Adidas, called ‘Adidas Messi’. Messi will be seen wearing Adidas’ new boots called, Adidas X Speedlflow. The Argentine will also wear all of Adidas’ apparel off the pitch. Messi is on the track to becoming one of the highest-paid and richest footballers on the planet.

Messi is one of the most famous footballers on the planet. He has 369 million followers on Instagram which makes him the second most followed footballer, behind Cristiano Ronaldo. His net worth is estimated to be around $600 million, with an annual salary of $34 million. He earns a reported $40 million from endorsements itself.

Messi has sponsorship deals with Adidas, Huawei, Gatorade, MasterCard, Lay’s, Pepsi, Hawkers, and Ooredoo. His earnings from these deals are a reported $40 million per year. His PSG contract earns him a reported $34 million + bonuses which add on to $41 million per year.