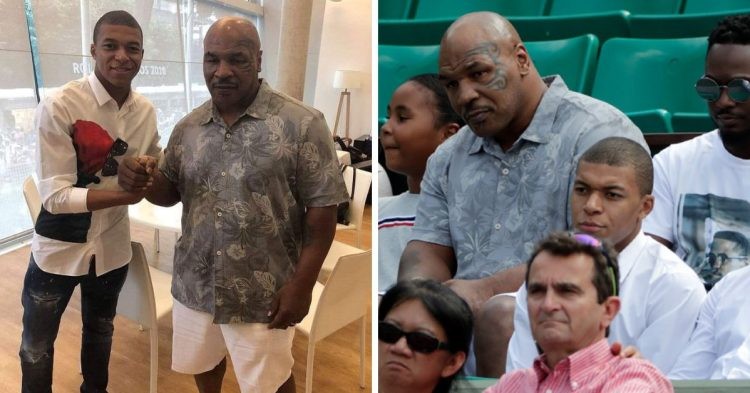 France‘s squad boasts some of the world‘s most talented players, particularly Kylian Mbappe, but they still strive to become even better. In 2018, Mbappe had the chance to study the boxing legend Mike Tyson at the French Open, likely learning a few tips to help his own performance. Tyson and his longtime partner were in Paris to witness fellow American Sloane Stephens compete against Anett Kontaveit in the third round of the French Open tournament.

Sloane Stephens handed her competitor an overwhelming defeat, winning 6–2, 6–0 to make it to her very first quarter–final in the second-largest tennis tournament of that year. It is likely the reason why Tyson consented to the photograph afterward, though he didn‘t appear to be too content about it.

At the peak of his career, Mike Tyson was considered to be the best boxer in the world. Since retiring in 2005, he has created his own YouTube channel and podcast, written two books, and made appearances as himself in many Hollywood films and television shows. Despite his notorious past, the 55–year–old has successfully reinvented himself.

Was Mike Tyson unhappy to pose for an image with Kylian Mbappe?

After the Facebook post of PSG star and Mike Tyson surfaced on the internet, causing a flurry of reactions from fans. While some were impressed to see the two icons together, many couldn‘t help but poke fun at the apparent “sadness” on Mike Tyson‘s face. Many fans attributed the expression to Tyson‘s alleged scopophobia, which is a fear of being seen or watched.

A fan jokingly commented, “Ask him to show you how to punch – it seems like Tyson doesn’t like the camera!” But as it turns out, the joke was on them. Contrary to popular belief, Mike Tyson does not actually suffer from scopophobia. In fact, he has appeared in numerous television shows, films, and even in a cameo in the iconic movie, The Hangover. This clearly indicates that he is perfectly comfortable with being seen or watched by millions of people.

Mike Tyson, known for his misdeeds both in and out of the boxing ring, may not have much knowledge about football, but he can certainly advise 23-year-old French and PSG star Kylian Mbappe on how to avoid letting the fame and attention overwhelm him. Having the world at his feet and being ready to lead the future of soccer.