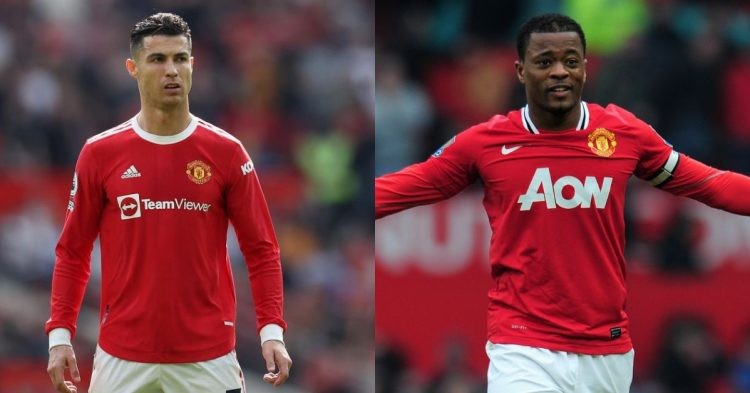 Cristiano Ronaldo is surely the idol of many young football players but football legends like Patrice Evra still idolize him for his record-breaking achievements. Ronaldo has recently scored against Everton making his 700th Club goal. The 37-year-old has been the top scorer for the red devils for the season 2021-22.

“Cristiano Ronaldo is an alien. I won’t call him the GOAT, because he’s not from this earth. It’s crazy. What I like about Cristiano is his discipline. When I was training with him, that’s the word that I had in my head every single day.”– Evra said praising Ronaldo

Cristiano had managed the previous season to score 18 premier league goals and 6 champion league goals. Yet Manchester United failed to qualify for the prestigious champions league this season. Currently, he holds the record for the Most international goals in football. At Real Madrid, Ronaldo has 450 goals to his name—more than half of his total.

Recently we have seen a lot of Big names appreciate Ronaldo for his sportsmanship. Patrice Evra, one of Ronaldo’s former teammates, congratulates him for his 700 club goals achievement. He thinks Ronaldo is an alien and refuses to refer to him as the “GOAT” since he is from another planet.

‘When Cristiano invites you to his house say no… he’s a machine, he doesn’t want to stop training’

Patrice Evra is a former Manchester United captain who played as a left-back. He has captained the French international team also. It is believed that Patrice and Ronaldo have a special relationship. It was revealed by Patrice while joking that he had gone to Ronaldo’s house for lunch as well.

we keep hearing about Cristiano Ronaldo’s work ethics and you think it’s a joke, even I’m the kidst of world class athletes that are even younger than him they are nowhere near close to his training. Hard work always pays.https://t.co/pcb8RTyQT7

Patrice Evra has even jokingly mentioned about why one should not go to Cristiano Ronaldo’s for lunch. The former United player states on podcast that once he went to Ronaldo’s place for lunch after training. He adds on the podcast; “You know I was really tired, and at the table there was only salad and plain white chicken so I was like, okay – and water – not any juice, and we started eating and I was thinking some big meat would be coming after that but there was nothing.”

Your work ethics,discipline, commitment, and everything motivates to become a great person in life.

Whenever I feel low or demotivated,I think if u wud had been in my place then what u would have done.

After having lunch Ronaldo stood up and asked Patrice to join him for two touch and some showboating. Ronaldo definitely keeps himself fit always. He follows a strict diet and has a gym constructed in his home. All of these elements keep the 37-year-old injury-prone player in one of the hardest leagues in the world. Many admire his lifestyle as the player is always looking forward to improve his game even after earning soo many achievements.

“This guy has got an obsession with beating the haters, ramming it down their throats. That 700 was to people like Jamie Carragher and people like that who are desperate to get him out of the door.” pic.twitter.com/07CS9yz770

LeBron James, Will Smith, Rafael Nadal, Connor McGregor, and Usain Bolt are some of the big names who have shown admiration for Ronaldo for his hard work and moral ethics.