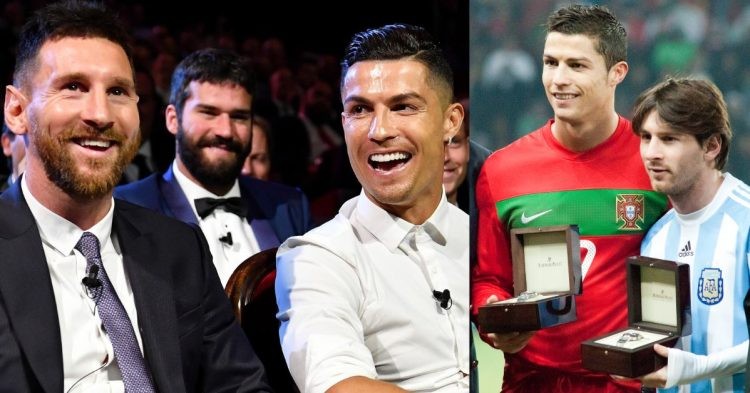 Cristiano Ronaldo is one of the greatest soccer players of all time and is renowned for his rivalry with fellow soccer star Lionel Messi. Despite the intense rivalry, Ronaldo has always remained humble and gracious in his interviews.

Cristiano Ronaldo does not think that Lionel Messi’s legacy will be affected by his World Cup win against France in the championship match. Messi made two goals during the match, one from a penalty kick and the other one in the second half of extra-time after Lautaro Martinez’s shot was blocked by Hugo Lloris. He also scored during the penalty shootout which brought Argentina to victory.

Lionel Messi had already made it known that the recent World Cup in Qatar would be his last, while this was the final tournament for Ronaldo as well – whose Portugal team was bested 1-0 by Morocco in the quarter-finals.

After missing the opportunity to add a major title to his impressive list of accomplishments, Ronaldo left the pitch in tears. As he is currently without a club after departing Manchester United last month, he will be 41 years of age when the next World Cup rolls around.

The Messi-Ronaldo rivalry has been heavily publicized by the media and football fans alike. These two players have been in competition for the last nine years while playing for two different clubs; Barcelona and Real Madrid. Their similar records and achievements have only increased their rivalry and made it more intense.

Together, these two soccer players have accomplished some incredible feats in the sport, gaining the recognition of being two of the greatest ever. Both of them have earned some remarkable accolades, amassing a total of 76 major trophies (Messi with 42, Ronaldo with 34) throughout their careers up to now.

They have continuously smashed the 50-goal mark in a single season, joining the ranks of eight players who have scored more than 700 goals for both their clubs and their countries. Notably, Ronaldo holds the record for most official goals in a career.

Who is your 🐐 and why? Here are both Cristiano Ronaldo & Lionel Messi stats after 1000 games. Tell me your 🐐 pic.twitter.com/gV0oScLfGB

Following Argentina’s win in the 2022 FIFA World Cup, helmed by Messi, and Ronaldo’s transfer to Saudi Arabian club Al-Nassr, many football commentators, experts, and aficionados have asserted that Messi has come out on top in the long-standing competition between the two players.

What did Ronaldo say about Messi?

In a recent interview with Piers Morgan, Cristiano Ronaldo discussed his rivalry with Lionel Messi. Despite them being competitors for nearly two decades, Ronaldo has great respect for the seven-time Ballon d’Or winner. He went on to say that, from his perspective, Messi and his former coach Zinedine Zidane are the two greatest players he has ever seen, with himself being excluded from the list.

Cristiano Ronaldo said “As a person, we share the stage 16 years, imagine, 16 years. We share. So, I have great relationship with him. I’m not a friend of his in terms of, what I mean friend is the guy who was with you in your house, speaking on the phone, no, but it’s like a teammate.”

The debate between Cristiano Ronaldo and Lionel Messi will likely continue for years to come. Both players have consistently displayed excellence and greatness on the pitch, and both have captivated and inspired fans all over the world with their performances.

Ultimately, it is up to each individual to decide who they believe is the greatest player of all time. Regardless of who is chosen, it is undeniable that both are two of the greatest footballers in history and have achieved unparalleled success and recognition in the world of football.