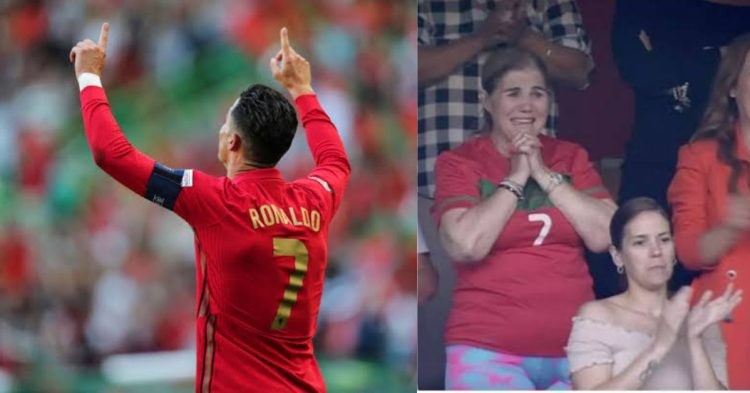 Cristiano Ronaldo is one of the greatest soccer players to ever grace the beautiful game. The veteran Portuguese has broken an enormous number of records. Those special moments get even more significant if the athlete’s close family members are present for the occasion. Ronaldo’s mother Dolores was present on such an occasion.

Cristiano Ronaldo led the Portugal team for an important fixture in the Nations League Group 2 matchup against Switzerland in 2022. Cristiano Ronaldo earlier in 2022 broke the record for the most goals for the international team in men’s soccer. He beat Iranian Ali Daei’s exceptional 109 goals record. The Portuguese came onto the pitch looking to extend it further.

The Portuguese looked very dominant from the very start. The first goal of the match came from Ronaldo’s direct free-kick on the goal. The Swiss goalie made a decent save, but William Carvalho was there to tap in the rebound. For the next goal, Diogo Jota set Cristiano up for a very good finish past the keeper. After scoring the goal, he pointed to the sky in the 35th minute.

Ronaldo had a simple tap-in for his second goal in the 39th minute of the match. Dolores Aveiro was present in the crowd and she broke into tears after seeing his son score two goals in front of her. Portugal won the match comfortably by four goals.

What was special about Cristiano Ronaldo scoring 2 goals against Switzerland?

Cristiano Ronaldo is probably the deadliest goalscorer the game has ever seen. Dolores Aveiro has been seen many times going to watch her son play and score, but she never broke into tears as she did against Switzerland. That moment was special for other reasons.

Cristiano Ronaldo had a very difficult childhood. He had to fight even before he was born. The Portuguese had obvious talent, but the hard work he put into his career, makes him untouchable. He started his career at Sporting Lisbon as a flashy and skillful winger, before moving to Manchester United and Real Madrid to create history.

Cristiano’s brace against Switzerland made his mother very emotional. Most probably the reason behind this is the match took place in Estadio Jose Alvalade, the home of Sporting Lisbon. The Portuguese superstar spent six seasons of his youth with the club.

Ronaldo moved to Sir Alex Ferguson’s Manchester United after playing a match against Sporting. The match co-incidentally took place in the Estadio Jose Alvalade, which was inaugurated that day. Sporting won the match 3-1. A 17-year-old trickster stole the show from the Sporting left-wing with the number 28 on his back. A few days later Sir Alex signed him and gave him the iconic number 7 of Manchester United.

Dolores Aveiro has been a very integral and emotional part of Cristiano Ronaldo’s journey. She has seen her son become the biggest sports icon from nothing. And it all started with Sporting, from Estadio Jose Alvalade. She couldn’t hold her tears back seeing her son score in the place where he started his journey toward glory and greatness.