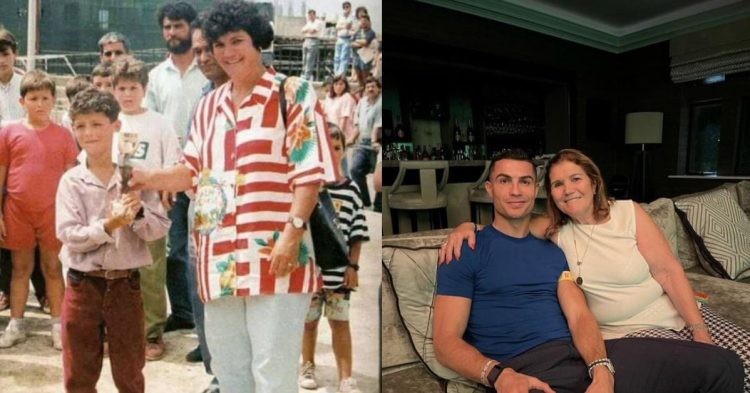 Cristiano Ronaldo’s mother, Dolores Aveiro once revealed that she wanted to abort her pregnancy when she was carrying the former Real Madrid star. At 37, Cristiano Ronaldo has won nearly everything there is to win in the realm of soccer. The Al-Nassr player has five Ballons d’Or to his name, he has won the Euros, and just about every trophy, there is to win at the club level.

It seems strange that the little boy from Madeira who went on to achieve immortality in the hearts of millions of soccer fans may never have been born. In her book titled Mae Coragem (Mother Courage), Dolores Aveiro shockingly revealed that she wanted to terminate her pregnancy. Aveiro said that she “drank warm ale” and “ran till she dropped,” to abort her pregnancy.

Recalling the incident, Mr. Champions League‘s mother said that she was not in favor of having the baby (Cristiano), but the doctor didn’t support her decision. “He was an unwanted baby,” she said. It was revealed that Ronaldo was aware of this backstory, and despite it, remains close to his mother. Although, when the book was first released in 2014, Ronaldo did not attend the launch.

Why did Ronaldo’s mother want to abort her pregnancy?

Cristiano Ronaldo and Dolores Aveiro previously shared a laugh on the incident. The ex-Manchester United star’s mother revealed that Ronaldo knew of her attempts to abort his birth. “He told me when he found out, ‘Look, mum, you wanted to abort and now I’m the one who’s pulling the purse strings in the house’.” This is what the former Juventus player jokingly said upon finding out.

But why did Dolores Aveiro want to abort the birth of her child? It was primarily because of the poor financial situation that Ronaldo’s family was in while he was growing up. It has been publicly revealed that Dolores’s husband and Ronaldo’s father, was an alcoholic. Jose Dinis Aveiro‘s alcoholism put a lot of financial strain on the family.

Cristiano himself had once said: “People say we have money and cars but we suffered. He would drink nearly every day and I am frustrated that he is not able to see my success.” This was a reference to his father’s untimely death in 2005 due to liver issues stemming from his alcoholism. It has also been revealed that Ronaldo’s mother, Dolores, worked two jobs to support her children after Jose’s demise.

The Portugal soccer star’s sister, Katia Aveiro, also detailed the economic hardships of the family while growing up. Amid such a bleak financial state of affairs, it seems, Dolores may have deemed it prudent to abort her pregnancy.