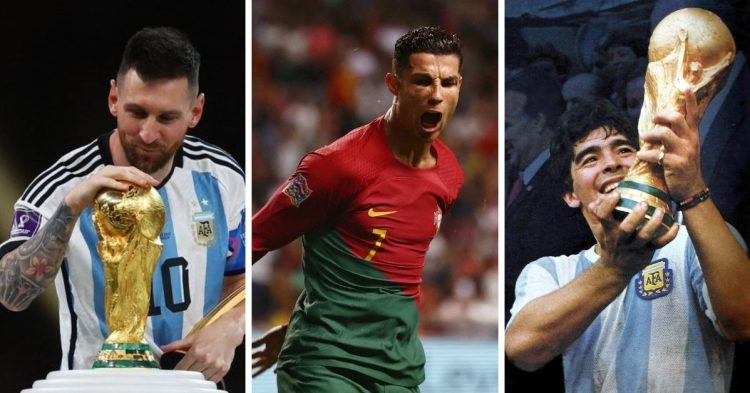 Cristiano Ronaldo, Portugal’s soccer icon, has outscored two of the greatest soccer players of all time – Argentina’s World Cup Champions Lionel Messi and Diego Maradona. With 118 goals in 196 matches and counting, Ronaldo has scored the most goals in international soccer in the men’s game.

Ronaldo’s record-breaking career has earned him the title of the most prolific active goal scorer. Messi, with 98 goals, is third on the all-time top international goal scorers’ list. Maradona, who represented the Argentina national soccer team as an attacking midfielder and playmaker from 1977 to 1994, had scored 34 goals in 91 appearances, making him Argentina’s 5th-highest goalscorer.

Despite the impressive achievements of Lionel Messi and Diego Maradona, Ronaldo has surpassed them by a large margin. He has scored more than triple the number of goals of Maradona and twenty more goals than Messi.

Ronaldo has achieved numerous accolades and awards throughout his career, including five Ballon d’Or awards and four European Golden Shoes. He is the most followed athlete on social media and is consistently one of the world’s most marketable athletes. However, Ronaldo’s success is not just attributed to his talent, but also to his dedication and hard work. He trains tirelessly, pushing himself to the limit in order to achieve more.

Cristiano Ronaldo has the most number of International Goals

Cristiano Ronaldo has set a remarkable record for international goals, with 118 scored representing Portugal since his first game in 2003. He also holds the record for most appearances in men‘s international soccer, having featured in 196 matches, a record he shares with Bader Al–Mutawa of Kuwait.

On 1 September 2021, Ronaldo surpassed the previous world record for international goals, set by former Iran forward Ali Daei, when he scored twice in Portugal‘s European Qualifier against the Republic of Ireland in Faro–Loulé. At the age of 36, Ronaldo became the only other man to have scored a century of international goals, breaking the existing record.

In 2003, Ronaldo failed to convert on his first two attempts, but since then has been successful in scoring at least once each year, including in 2022. This ties him with Robbie Keane, who achieved the same feat with the Republic of Ireland from 1998 to 2016.

Virginia Tech Soccer Player Kiersten Hening’s Lawsuit: The Inside Story of Her Refusal to Kneel and $100K Settlement